Goosebumps Wiki
Register
Don't have an account?
Sign In
Advertisement
in: Books, Goosebumps Series 2000, Books Released In 1999,
and 10 more

Jekyll and Heidi
Return to HorrorLand is the thirteenth book in the Goosebumps Series 2000 book series. It was published in 1999.

The cover illustration features a purple Horror standing on top of a cart handing out green "Ice Scream".

It has been six months since Lizzy Morris and her family paid a visit to HorrorLand, a horrific amusement park filled with many vile creatures and hideous attractions. Lizzy, her brother Luke, and his friend, Clay, are big fans of the "The Strange Report", a show hosted by paranormal investigators Derek and Margo Strange. While watching an episode featuring a boy named Evan Ross talking about his experiences with Monster Blood, Derek and Margo arrive at their doorstep.

The Stranges promise their mother they will be safe whilst doing this, and $10,000 if she will agree to let the children come with them to Florida. This is where HorrorLand is currently located. The horror-themed theme park keeps moving locations every few months and the Stranges have tracked it to Florida. They intend to photograph all the nefarious goings-on at the park by posing as Lizzy and Luke's tourist parents. The Stranges believe that the amusement park is no longer a backdrop for a television show, but something else entirely and they wish to find out once and for all what the truth is!

Despite the many horrors she witnessed last time, Lizzy and Luke's mother agree on this as the Stranges promise to take good care of the kids. Luke also asked the Stranges if Clay can come along too and Margo and Derek take the children down to Florida where they successfully infiltrate the newest incarnation of HorrorLand. Unfortunately, a Horror smashes Derek's camera since cameras are not allowed in HorrorLand. But luckily, Margo and Derek have secret cameras that will not be visible to the monsters, so there is no way that they will get stolen or smashed. And so, they continue to film as the children explore the park.

They visit an Egyptian pyramid where Luke becomes trapped in a sarcophagus until he falls to safety from a trap door. The next attraction the children decide to visit is a Monster Dentist Office. Once inside, they see row after row of monster dentists operating on bawling children with drills. One child screams out "You broke all my teeth!" and another complains that the dentist drilled his tongue. A third child throws up blood. Lizzy finds herself strapped in and the monster is about to drill away all her teeth when she realizes that the dentist is actually a robot.

Afterwards, the children realize they have lost track of the Stranges, who have insisted that the children are never in any danger. But they are disappointed and begin to heckle the trio to show them real danger in the park. Eventually, the children get captured in a giant butterfly net by a Horror and are taken down to a torture chamber. It is there that they meet the Dungeon Master, who then proceeds to unleash hundreds of ferrets to eat the children. The children escape the ferrets and take in a magic show. Amaz-O pops up to do some illusions. After pulling animals out of his hat, he then pulls Lizzy from the audience and throws her into a cage with a live tiger who then vanishes.

Once she goes back into the auditorium seats, she discovers her brother and his friend did not even bother to stay to watch the whole show. Lizzy runs around the park in search of the two boys and eventually finds them chained to poles in a desert while vultures circle above. The Stranges provide no use to them and get thrown out of the amusement park. The Horrors want to capture the children but then Lizzy gets an idea to run into the gift shop, try on the Horror Halloween Costumes sold within, and then walk around among the Horrors as one of them.

The Horrors lead the three children to the top of a mountain for an attraction called The Final Leap, which is just a steep ledge. Before they ride off to their doom, three more Horrors show up and walk the children back down to the ground. The children ask what is going on, but the Horrors tell them there has been a change of plans. Once they're safely past the park's gates, the Horrors take off their masks and reveal themselves to be reporters from a television show called Weird Copy. The reporters reveal that thanks to the children, they have footage which can have the Stranges arrested and HorrorLand shut down for good.

The reporters feel that they have not gotten enough information to be able to make a good enough report. So they proceed to drive Lizzy, Luke, and Clay to another amusement park named Terrorville. 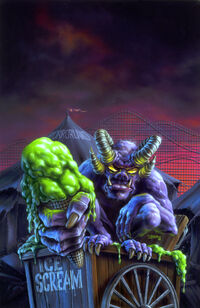 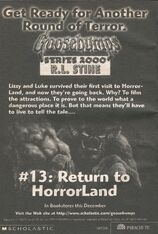