Another summer. Another spirit.

Return to Ghost Camp is the nineteenth book in the Goosebumps Series 2000 book series. It was published in 1999.

This book is the spiritual successor to the forty-fifth Goosebumps book, Ghost Camp. While they are similar thematically, none of the characters or locations from the original book return in this book.

The cover artwork shows a demonic skeletal spirit rising from a campfire.

Dustin Minium doesn't want to go to sleepaway camp, but his parents say that he doesn't have a choice. He is being forced to spend four weeks at Camp Full Moon. Dustin's younger brother, Logan, is signed up for the two week program, so he will be sent to camp some time after Dustin. Dustin is so scared of the idea of going to camp that he gets nightmares about it.

On the bus ride to camp, Dustin is befriended by Ari Davis, a cool and athletic boy. Ari convinces Dustin to switch names with him while they're at camp as a practical joke. When the boys get off the bus, they meet Uncle Lou, the camp director. Uncle Lou assigns "Dustin" to a dilapidated cabin, but — because they swapped places — Ari goes there instead. Dustin, acting as Ari, gets put in the nicest cabin. Dustin meets his bunk-mates: Noah, Ben, and Jason. All three boys seem extremely happy to have "Ari" in their bunk. The three boys help Dustin unpack and give him the best bed in the cabin. Dustin asks the boys why they're so happy to have him around, but the boys become somber and don't answer directly. They take Dustin to Camp Full Moon's campfire.

At the campfire, the three boys continue to pamper Dustin. While Noah, Ben, and Jason are distracted, the real Ari approaches Dustin and asks to switch back, but Dustin wants to keep up the act. While looking around the campfire, Dustin sees another camper eat what looks like two living bees. Uncle Lou calls all of the campers together. Uncle Lou begins telling the kids a ghost story about The Snatcher, a creature that can take the form of a fox. It supposedly kidnaps one camper every year.

After the story ends, Dustin is dragged into the woods by his bunk-mates. The boys want to talk about The Snatcher, but Dustin assumes that the creature isn't real. Dustin's bunk-mates don't understand why he is taking the story so lightly. The boys ask him if he really knows what he must do. Dustin doesn't know, so he runs deeper into the woods. A group of red foxes attack Dustin, but he is saved by Noah. Dustin is scolded by his bunk-mate and told that he isn't ready to face The Snatcher yet. Noah explains that Ari was chosen to be The Snatcher's victim this year. When Dustin goes back to his cabin, he admits that he isn't actually Ari, but the boys won't believe him; they assume that he is trying to avoid The Snatcher.

The next day, Dustin offers to trade places back with Ari, but Ari declines. Dustin tries to prove his identity to Uncle Lou, but he is unable to do so. Ari and Dustin go kayaking in a river within the woods. While kayaking, Dustin hears a screaming coming from the woods. The screaming leads one of the counselors to decide that the boys shouldn't be kayaking, so they are forced to bring their kayaks back. Later, while walking past the camp's baseball diamond, Dustin thinks he sees a ball pass through a player and a baseball bat swing through a catcher's head. Dustin assumes that his mind is playing tricks on him.

That night, instead of going to the mess hall, Dustin goes to the camp's payphone. Dustin tries to call his mother, but he's stopped by Ari, who breaks the phone. Dustin says that he isn't upset about the phone; his brother will be arriving at camp on Monday, and he'll be able to verify who's the real Dustin. Later that night, Dustin and his bunk-mates attend the campfire. Dustin is frightened when another camper uses his teeth to hold and roast a marshmallow in the campfire.

Dustin tries running away, but he bumps into a girl. The girl says that she came from the girls' camp, which she absolutely hates. and identifies herself as Laura. Apparently, she knows quite a bit about Dustin; she had been spying on him while he was kayaking. Laura says that there's a highway beyond the river in the woods; if they cross it, they can escape. Not wanting to leave his brother alone at camp, Dustin says that he'll try to escape the following night before heading back to camp.

The following morning, Dustin sleeps in too late. He misses the initial arrival of Logan's bus. Dustin eventually finds the bus and sees that Ari is already there. Dustin leads Uncle Lou to Logan, but Logan acts like Ari is his brother. Later, Dustin talks to Logan, and Logan explains that Ari threatened to hurt him if he didn't lie about who his brother was. Dustin tries to convince Logan to leave the camp, but Logan wants to stay. Dustin decides that he will escape with Laura, get in contact with his parents, and they will be able to rescue Logan.

Dustin goes into the woods and finds Laura. The two kids locate the river, and Laura tells Dustin that they must swim across to escape. Noah suddenly appears, floating above the river. He commands Dustin to stop, but Laura keeps pulling Dustin forward. Noah explains he was The Snatcher's last victim, and Laura is The Snatcher. According to Noah, all of the campers at Camp Full Moon are ghosts. Each year, the campers bring new kids to Camp Full Moon; if one living kid can cross the river, all of the ghosts will be set free. Dustin runs away from Laura and Noah. Laura chases Dustin and transforms into a ravenous fox. The Snatcher tackles Dustin, but Dustin throws the creature off of himself. Dustin sees slimy hands reaching out of the river. Noah says that Dustin can't cross the river by swimming because it is infested by monsters. Noah suggests that Dustin climb over the river using a nearby tree branch.

Dustin climbs onto the branch and crawls to the other side of the river. When The Snatcher jumps onto the branch, the branch breaks, and The Snatcher falls into the water below. It is pulled down into the river by the slimy hands. Noah thanks Dustin for freeing all of the ghosts before fading away. Dustin is extremely proud of himself, but he slowly realizes that he doesn't know where he is or how he can get back across the river. 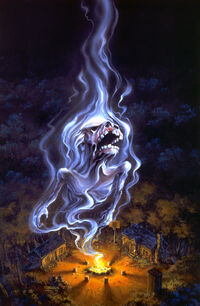 Retrieved from "https://goosebumps.fandom.com/wiki/Return_to_Ghost_Camp?oldid=124844"
Community content is available under CC-BY-SA unless otherwise noted.