"Piano Lessons Can Be Murder"

"Night of the Living Dummy II"

"Return of the Mummy" is the ninth episode of season one of the Goosebumps TV series. It premiered on December 22, 1995 on Fox during the Fox Kids block.

Gabe is in for the ultimate adventure when he visits his Uncle and cousin Sari in Egypt. Uncle Ben, an important archaeologist, is about to unearth the tomb of the great Prince, Khor Ru. But, superstition has it that if the Prince's mummy is disturbed, he will come back to life and seek revenge . . . on whoever wakes him from the dead! Will Gabe get to see a real, live mummy? And if so, will he live to tell his tale? 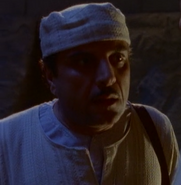 The Mummy (Prince Khor-Ru)
Add a photo to this gallery

Add a photo to this gallery
Retrieved from "https://goosebumps.fandom.com/wiki/Return_of_the_Mummy/TV_episode?oldid=136738"
Community content is available under CC-BY-SA unless otherwise noted.