Phantom of the Auditorium
Return of the Mummy is the twenty-third book in the original Goosebumps book series, and it is a sequel to The Curse of the Mummy's Tomb. It was first published in 1994.

Both the original 1994 and 2010 Classic Goosebumps cover illustrations feature Prince Khor-Ru coming out of a tomb as steam billows out.

After last year's scary adventure, Gabe's a little nervous about being back in Egypt. Back near the ancient pyramids. Back where he saw all those creepy mummies. Then he learns about an Egyptian superstition. A secret chant that is supposed to bring mummies to life. Gabe's uncle says it's just a hoax. But now it sounds like something's moving in the mummy's tomb. No way a couple of dumb words can wake the dead. Can they?

Gabe is traveling back to Egypt for the summer. He will be staying with his uncle — Ben Hassad — and his cousin — Sari Hassad. Gabe's uncle is a renowned scientist, and his archaeological team has discovered an ancient pyramid with an unopened tomb. As Gabe's flight is about to land in Egypt, he clutches The Summoner, a mummified hand and magical artifact. The hand becomes unusually cold, and Gabe speculates that this is a bad omen. Once Gabe's plane lands, Uncle Ben picks up Gabe at the airport and takes the boy to the archaeological site. Dr. Hassad gives Gabe a necklace. The pendant is made of amber, and it has a preserved scarab inside. According Gabe's uncle, the bite of a scarab means instant death. At night, Gabe is almost certain that he felt the scarab moving around within the amber.

The next morning, Gabe eats breakfast with his uncle. Dr. Hassad explains that the pyramid his team is exploring belonged to Prince Khor-Ru, one of Tutankhamen's relatives. After breakfast, Gabe, his cousin, and his uncle are preparing to go into the pyramid when a woman runs up to them. She introduces herself as Nila Rahmad and says that she is a reporter. Nila begs to allowed access to the pyramid, and Gabe's uncle reluctantly agrees. Nila has a necklace similar to the one Gabe was given, but hers has no scarab inside of it. The group goes into the pyramid, but Gabe becomes separated and falls into a hole filled with spiders. Gabe is rescued by his relatives. He checks to see if he damaged The Summoner during the fall, and Nila recognizes the hand. According to her, she knows a lot about ancient Egypt.

The next day, Dr. Hassad announces that his team has discovered the entrance to the pyramid's tomb. The tomb's entrance features a message that translates to, "Let me rest in peace." One man, Dr. Omar Fielding, demands that they do not enter the tomb, as it violates the prince's wishes. According to him, if anyone reads the words written on the tomb five times, the mummy will come to life. Despite this, the archaeological still enters the tomb. Inside, the group discover a room filled with treasure and a sarcophagus containing a mummy. Dr. Fielding returns with a team of police officers, saying that he wishes for them to protect the tomb.

Dr. Hassad expresses a great distrust for Dr. Fielding. While his is having dinner with his relatives and Nile, he chooses to reveal the ancient words that can supposedly bring the mummy to life: Teki Kahru Teki Kahra Teki Khari. Dr. Hassad leaves to take a call, and Nila decides to depart. Gabe chants the words five times aloud in an attempt to scare Sari, but everything seems to be fine. The kids are met by Dr. Fielding, who is looking for Dr. Hassad. The kids choose to follow the man, and they see him and Dr. Hassad enter the pyramid. Dr. Fielding emerges, but Dr. Hassad does not.

Sari begins panicking. She shouts at Dr. Fielding, but he doesn't even seem to notice her. The kids grab flashlights and enter the pyramid. They make their way to Khor-Ru's tomb, and they find Dr. Hassad trapped inside of the sarcophagus, unconscious. The kids briefly wonder where the mummy could be, but they soon find out. The mummy begins walking towards them from the entrance of the room. The kids sprint past the mummy, and they run into Nila. Nila is holding The Summoner, and she waves it around. She calls to the mummy, calling it her brother. Nila thanks Gabe for The Summoner to Egypt, because the ancient words likely wouldn't have worked without it. Nila demands that the mummy destroy the kids, and the mummy begins moving closer.

Without warning, the mummy lunges past the kids and grabs Nila. It demands to be allowed to rest in peace. Nila drops The Summoner, and Gabe grabs it. Gabe tries to rescue Nila, but he accidentally tears off her pendant and lets it fall to the floor. Nila wails and reveals that the pendant was the key to her elongated youth. Every night, she crawled into it, and that allowed her to live for 3,000 years. As she grasps at the shards of her pendant, Nila turns into a scarab. Dr. Hassad emerges, and the mummy lies lifeless on the floor. Apparently, Dr. Fielding had seen Nila enter the pyramid, and he had brought Dr. Hassad to investigate. Dr. Hassad was knocked unconscious, and Dr. Fielding left to get the help of the police. Dr. Fielding returns with multiple officers, and he apologizes to Sari for not responding. Dr. Hassad tells the officers that Nila simply escaped and that the mummy hadn't walked.

That night, Gabe is bragging about how brave he was. He gloats about breaking Nila's pendant and turning her into a scarab, but Sari warns him that Nila might still be looking for him as a scarab. Gabe crawls into bed and is about to go to sleep, but he cries out in pain.

'Ready for a Scream' T-shirt. 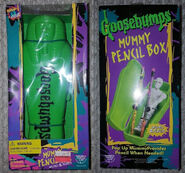 Mummy Pencil Box in package (front and back). 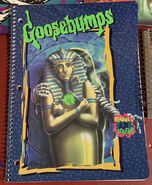 Greeting Card (front)
The Mummy has his Eye on You This Halloween...

Greeting Card (inside)
When You're Done with it, Please give it back to him.

Return of the Mummy was adapted into an episode of the Goosebumps TV series. It is the ninth episode of season one. 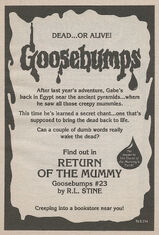 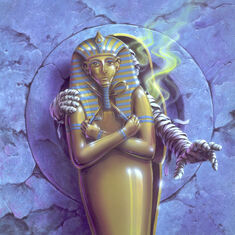 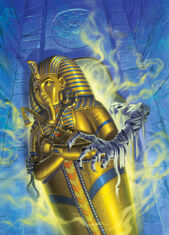 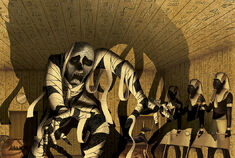