Regina Barstow is an antagonist in the twenty-first Goosebumps book, Go Eat Worms!, and its accompanying television adaptation. She is Todd Barstow's sister.

Todd wants to figure out what Patrick MacKay's science fair project will be, but Regina won't tell him. Todd asks Regina for Patrick's address, so she intentionally give Todd a fake address.

Upset at being tricked, Todd uses some of his worms to sabotage Regina's science fair project. During the science fair, Regina finds that her project — a giant, papier-mâché robin — has been filled with worms. After this, Todd begins finding worms everywhere.

Todd becomes greatly upset because he can't figure out how his worms are escaping. Towards the end of the book, Todd discovers that Regina had been the one placing worms in his belongings. Todd begins plotting a revenge plan, and the plan requires extra worms.

While Todd is digging for worms, a giant worm erupts from the ground and tries to drag him down. Todd speculates that the giant worm is the angry mother of the worms that he's been collecting. The worm is scared off when Regina passes by while carrying her giant, papier-mâché robin.

Regina hates gross things like worms. While her brother Todd is often cruel to her, Regina can be equally mean-spirited. Throughout the book, Regina convinces Todd that his worms are out to get him.

In the book, Regina has long, brown hair. In the television adaptation, Regina is blonde. 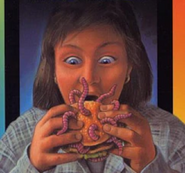 Regina as depicted on the French cover of Go Eat Worms!.
Add a photo to this gallery
Retrieved from "https://goosebumps.fandom.com/wiki/Regina_Barstow?oldid=130834"
Community content is available under CC-BY-SA unless otherwise noted.