This is a list of references and allusions in the Goosebumps franchise.

Some Goosebumps book titles are references to other media:

Goosebumps reference in the show Clarence.

The dummy featured in Regular Show looks similar to Slappy.

The Scare-Your-Pants-Off Club books from Arthur. 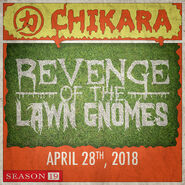 Promotional image for Chikara's Revenge of the Lawn Gnomes event.
Add a photo to this gallery
Retrieved from "https://goosebumps.fandom.com/wiki/References?oldid=152167"
Community content is available under CC-BY-SA unless otherwise noted.