Having been forced to stay inside most of his childhood due to terrible allergies, Stine was picked on by kids who would call him names and throw rocks at his window. With the help of his special typewriter, Stine wrote about monsters, demons, ghosts and ghouls that would terrorize those who tormented him. Unfortunately, because they became real to him, Stine's monsters eventually found a way to escape from his works.

He managed to trap his monsters in their books, keeping them locked. The most evil of them all was Slappy the Dummy, who was a puppet version of himself; a demonic ventriloquist dummy with a serious Napoleonic complex knew what was in Stine's imagination and tormented him in his dreams.

All of Stine's manuscripts.

After spending so many years alone, Stine decided to write a daughter into existence - Hannah. She was normal, but didn't age and appeared ghostly in the moonlight. Stine thought he kept her oblivious about her true nature, but Hannah knew a girl couldn't have so many Sweet 16s. Due to a book coming unlocked once in a while, they had to move around a lot to avoid questions and the police.

Using the alias of Mr. Shivers, Stine moved himself and Hannah to Madison, Delaware. A few short years later, Zach Cooper moved next door; this unfortunately would lead to a string of events that would unleash complete and utter chaos upon the town. Because of how close Zach and Hannah had become in just a few days, Zach snuck into their home after hearing Hannah scream. Zach accidentally unleashed the Abominable Snowman, but Stine was able to suck him back into the book.

Unfortunately, Slappy escaped his manuscript and began unleashing all the other monsters upon the town; he tossed them at random out of The Haunted Car, leaving it impossible to find all the manuscripts. This forced Stine to go along with Zach's plan to write all the monsters into a single book, which he could then burn to ensure that they never came back. This lead them through a gauntlet in the town (which included the Giant Praying Mantis, the Werewolf of Fever Swamp, and The Graveyard Ghouls), leading to the high school, where Stine's special typewriter was. As luck would have it, Slappy found him and broke his fingers, preventing Stine from finishing the last two pages.

After leading the monsters away with a bus rigged to explode, Stine was forced to let Zach write the rest of the story. Slappy found them again and unleashed the Blob that Ate Everyone, sealing Stine instead. As Slappy taunted him, Stine watched a maelstrom open and begin sucking in all the monsters, including Hannah, who was held onto by Zach as long as he could.

Sometime later, Stine's hands had healed and he was now the creative writing teacher at the school. He then revealed to Zach that he wrote Hannah back into existence, but this time, she would live a completely normal human life - being able to age. Burning her book, Stine walked as the couple left on their own.

To Stine's horror, the Invisible Boy somehow evaded capture, and was now writing his revenge...

In Goosebumps 2: Haunted Halloween, Stine's background is elaborated on. He lived in Wardenclyffe, New York from 1975 to 1985, and wrote an unpublished Goosebumps book titled "Haunted Halloween". His alias of "Mr. Shivers" is revealed to be Dr. Richard Shivers, the president of the R.L. Appreciation Society.

Stine receives a message from Sarah Quinn saying that "Haunted Halloween" has been opened. Because he remembers the book as his first yet unfinished story, he journeys to Wardenclyffe to help stop Slappy once and for all, though he has a run-in with Hap, Chip, and the Ghostly Witches.

Stine arrives at the Tesla Tower after Sarah stops Slappy and the machine is overloaded by Sonny Quinn and Sam Carter, and is impressed that the children were able to save themselves. He also points out that everyone who was transformed over Halloween night will have no memory of the night. These include Kathy, who was turned into a human ventriloquist's dummy by Slappy; Walter, who was transformed into an ogre by a Haunted Mask; and Tommy Madigan, who had been abducted by the Ghostly Witches.

At the end of the movie, Stine finishes a new Goosebumps book only for Slappy to reappear and suck him into a book of his own.

Stine appears as the hero of the game, the player must contact him to defeat Slappy. He also goes by the alias "Ghoulberg."

Stine is turned into a typewriter, and now the player must capture Slappy in his book to turn him back to normal again. Stine has the exact same role in this game's sequel, Goosebumps Dead of Night.

Jack Black portrays the fictional depiction of the author as a much younger-looking version of the real-life Stine.

Unlike the real Stine, the movie version portrays him as a grumpy recluse, who is overprotective of his daughter, Hannah. He is also trying to keep his creepy creations from escaping and causing havoc on the town.

He also has a very symbiotic relationship with his most evil creation, Slappy (who is his alter ego in the film). 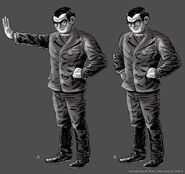 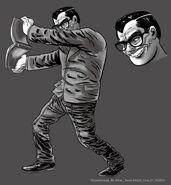 Manuscript of Revenge of the Lawn Gnomes.

Manuscript of You're Plant Food!.

E. Ville Creeper Plants emerging from the manuscript of You're Plant Food!.

Night of the Living Dummy manuscript.

Manuscript of The Abominable Snowman Of Pasadena.

The Haunted Car manuscript burning up.

The Manuscripts as they appear in Goosebumps: The Game.