The Creepy Creations of Professor Shock (1997)

He is featured in some bad endings:

He is featured in some good endings.

Professor Shock is a fierce-looking old man. He's bald, has a bushy white beard that hangs down to his chest, and he wears thick glasses over his dark eyes.

Professor Shock appears in the 2015 Goosebumps film portrayed by John Deifer, but credited as "Monster #6." He is among the few "monsters" in the film who speaks. Contrary to the book, he does not appear bald and instead has "electrified" hair.

Artwork of Professor Shock from Goosebumps. 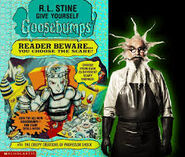 Add a photo to this gallery
Retrieved from "https://goosebumps.fandom.com/wiki/Professor_Shock?oldid=139924"
Community content is available under CC-BY-SA unless otherwise noted.