Dark Brown
The Player is the protagonist of Goosebumps: The Game. Their name and gender are customizable.

While walking home from school, the player finds their neighborhood has been overtaken by various monsters and characters from across the Goosebumps series, such as Monster Blood, Aunt Dahlia, and Dr. Brewer's Clone. Taking control of this character, the player must solve various puzzles in order to combat and get rid of this threat.

In the game's conclusion, it is revealed the monsters' invasion was caused bySlappy the Dummy, who managed to escape from his manuscript into the real world, setting free all of the others from their books.

Once the player has completed all the game's puzzles, they are able to contact R.L. Stine, who is able to re-capture Slappy back into his book. Once Slappy is vanquished, the player, their brother, Chad, and Stine, all team up to suck the rest of the monsters back into their books.

While the player is fearful of the escaped Goosebumps monsters, they prove to be very resourceful in dealing with them. 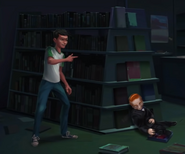 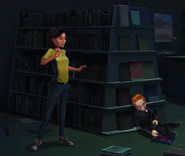