Goosebumps Wiki
Register
Don't have an account?
Sign In
Advertisement
in: Books, Goosebumps Most Wanted, Sequels,
and 13 more

Son of Slappy
Planet of the Lawn Gnomes is the first book in the Goosebumps Most Wanted book series. It was published in 2012.

Jay Gardener can't seem to stay out of trouble. Even after a fresh start in a new neighborhood, he keeps finding himself in bad situations. But it's not his fault! Jay wants to be a good kid, he really does, it's just these strange things keep happening to him. What kind of a place did his family move to? And why does every house have so many lawn gnomes in their yard? Jay better learn quickly that there are things a lot more scary than his parents...

Jay Gardener is a trouble maker who has recently moved to a new house. He tries to pull a prank on the mean neighbor Mr. McClatchy, when he notices that every house has a creepy looking lawn gnome in front of it. Before he can finish his prank, he is caught by McClatchy, who had been watching him the whole time. Jay's father scolds him, saying he hasn't been acting like himself lately. He goes for a bike ride and literally bumps into a kid named Elliot. He asks him about the gnomes and he only says "Oh, you know".

They go to a local quicksand pit called the Quagmire, which turns out to have dangerous fish creatures in it. Elliot falls in but Jay manages to rescue him, but loses his bike in the process. After being scolded by his father for losing his bike, Jay takes his dog Mr. Phineas out for a walk. The dog gets loose and gets into traffic, causing a car accident. Jay asks the driver of the crashed car if he's okay and he only repeatedly says "Malfunction". Two cops appear and take the man away.

On the way home, Mr. Phineas gets into Mr. McClatchy's yard and the neighbor kicks the dog, which angers Jay. He swears revenge and that night he sneaks onto his yard and tries to vandalize his lawn gnomes. But before he can finish, the gnome comes to life and grabs his arm. The others come to life and take out a big marker to drawn an "M" on his forehead. They start saying "Malfunction", just like the driver.

Jay escapes and tells his dad about what happened but he only scolds him for going outside and is not surprised that the gnomes chased him, but doesn't say more on the matter. The next morning, Jay tells Elliot about the previous night, but much like dad he acts like it was perfectly normal.

They talk more about why Jay's dad is on his case and Jay reveals that he had to move because he burned down his old house. He was messing with his chemicals when he accidentally created a big fire. Because he is known as a big trouble maker, everyone, even the judge at children's court, believed he did it on purpose. She agreed to drop the charges if they moved away, which they did. Jay has been trying to be extra good in this town, but it has been hard for him.

That night, he sneaks out to find out what is up with the lawn gnomes, much to the protest of his younger sister Kayla. He drags Elliot along with him. Before they can do anything, the lawn gnomes come alive and form a circle around them, again repeating "Malfunction". They pick up the kids and carry them away, as Elliot reveals it's the gnome's world at night, and Jay should stop pretending he doesn't know this. They freeze in the light, so Jay uses a light stick he had created to subdue them.

It also causes Elliot to faint, and when Jay tries to help him, his arm comes off and Elliot repeatedly says "Malfunction". The light goes out, so the lawn gnomes spring back to life and take him to the Quagmire. Kayla walks up and Jay pleads for help. She tells him she can't help him, as she reveals she is only his imaginary sister. She then fades away,

The gnomes throw him into the dangerous quicksand, only to rescue him with a net. Mom, Dad, Mr. McClatchy and Elliot then appear, and tell Jay that they did this to reset his programming. They ask him for his name and where he lives and he tells him his name is Pul-Mar and he lives on Polovia, Planet of the Lawn Gnomes.

Dad reminds Jay that they are robots (called "Mecha-noids") created by the lawn gnomes that inhabit the planet, so they can do the tasks that the gnomes can't do during the day. One day, Pul-Mar started telling people his name was Jay and that he lived on a made up planet called Earth. He also started pulling pranks, which isn't in his programming and talked to an imaginary sister, even though they never made a sister-noid. He never moved nor burned down his house, as all the houses on Polovia are made of stumis, which can't burn.

They celebrate getting their robot son back and Pul-Mar goes home only to find Mr. Phineas in his room. The dog talks to him, saying they must go back to Earth. Pul-Mar tells Mr. Phineas that's crazy which has the dog ask him, who does he believed in, them or him? 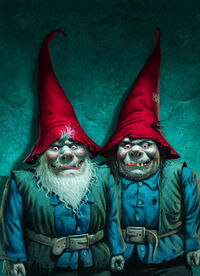 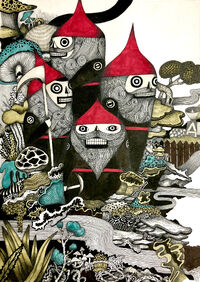