Piano Lessons Can Be Murder is the thirteenth book in the original Goosebumps book series. It was first published in 1993.

The cover illustration depicts a pair of disembodied hands playing the piano.

When Jerry finds a dusty old piano in the attic of his new house, his parents offer to pay for lessons. At first, taking piano seems like a cool idea. But there's something creepy about Jerry's piano teacher, Dr. Shreek. Something really creepy. Something Jerry can't quite put his finger on. Then Jerry hears the stories. Terrifying stories. About the students at Dr. Shreek's music school. Students who went in for a lesson... and never came out.

Jerry Hawkins and his family have just moved into a new home in the town of New Goshen. The house is old, creepy, and full of rooms. While exploring, Jerry discovers an old piano in the attic. To his surprise, the piano is in good condition, and still plays well. When he goes to sleep that night, Jerry begins to hear the piano playing a soft, sad melody. He goes up to the attic to investigate, but finds nobody playing it. Jerry tells his father about the music he heard, but his father thinks it to be another one of Jerry's jokes. He brings up the idea of moving the piano from the attic to the living room, and signing him up for lessons. Jerry thinks this to be a good idea, and the piano is moved.

Jerry's parents find an ad for the Shreek School, and enroll Jerry for private piano lessons. On Saturday afternoon, Jerry's teacherDr. Shreek arrives to introduce himself. Shreek is friendly, but seems to obsess over Jerry's hands. He studies them and tells Jerry how wonderful they are, before leaving. When Jerry hears the music again, his parents grow concerned. Jerry tells his parents the piano must be haunted. His father tells him it is only the stress of moving getting to him. The following day at school, Jerry meets Kim Li Chin, who happens to live across from him. Kim is enrolled in violin lessons, and upon hearing that Jerry is being taught by Dr. Shreek, becomes frightened and runs away.

Jerry hears the piano music once more, and this time, finally catches the mysterious player. The ghost of a young woman appears from a gray mist, seated at the piano. Frightened, Jerry asks who she is. The ghost looks up, and her face melts away into a gray skull. She tells Jerry this is her house, and to stay away from her piano. Jerry screams, and his parents rush into the room, but by the time they arrive, the ghost is gone. Jerry's parents comfort him, but still don't believe his story. Jerry's mother even decides to book him an appointment with a psychiatrist.

Dr. Shreek arrives the next morning, pleased with Jerry's progress. He tells Jerry's mother he wants to continue their lessons at his school every Friday. When Jerry goes to the psychiatrist, he is told the ghost he is seeing is simply a manifestation of his fears, much to his annoyance.

Jerry arrives at the Shreek School the following Friday, and quickly becomes lost in the massive building. While wandering the halls, he runs into bizarre floor sweepers built by the school's janitor, Mr. Toggle, who Shreek describes as a mechanical genius. Dr. Shreek leads Jerry to the rehearsal room, and along the way, he hears piano music playing non-stop. When exiting the school, Jerry runs into Mr. Toggle, who promises to show Jerry his inventions when he arrives for his next lesson. When he eventually does, Jerry is amazed to discover the various pieces of machinery Toggle has created. He seems to have a specific interest in making music. While in Toggle's workshop, Jerry hears a cry for help, but upon questioning Mr. Toggle, is told the noise is faulty equipment.

Jerry runs into Kim again, and questions why she ran away. Kim tells him about the scary stories she's heard about The Shreek School. She tells him that monsters are said to roam the halls, and some kids have went into the school, and never come out. Jerry doesn't believe her stories, but realizes he's never actually seen a single student besides himself at the School. He tells Kim of the ghost he's been seeing, and she laughs, believing it to be a ghost story he made up. When Kim leaves, the ghost appears again, and tells Jerry the stories are all true. She warns Jerry to stay away from the School. To his horror, Jerry's sees the ghost has no hands, and screams for his parents. He tells them he longer wants to go to the School, and that he wants the piano out of the house. His parents agree, but force Jerry to go to one more lesson so he can properly quit.

When Jerry tells Dr. Shreek he's quitting, he flies into a rage, and says he cannot leave, as he needs Jerry's hands. He chases Jerry all across the school until Jerry eventually reaches the recital hall. In the room, Jerry witnesses floating, disembodied hands playing the pianos. Dr. Shreek catches up to Jerry, and grabs ahold of him. Luckily, Mr. Toggle comes to his rescue and shuts Dr. Shreek off, revealing him to be another robot he created.

Before Jerry can leave, Mr. Toggle stops him, saying he still needs Jerry's hands. He explains that he wishes to create beautiful music free of human error, but hands are too complex to build. To compensate, Toggle takes real hands for his creations. Jerry tries to escape, and as he does, the ghost girl appears. She tells Jerry she tried to warn him of the dangers of the school. The ghost summons a horde of other spirits who attack Toggle, and drag him away to an unknown fate.

Several months pass, and Jerry's life returns to normal. The piano is out of the house, and he is now a part of a baseball team. Everyone tells Jerry he has great hands. 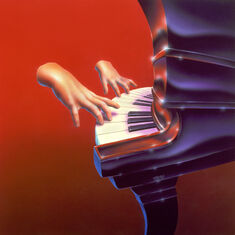 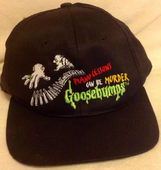