Vampire Breath
Phantom of the Auditorium is the twenty-fourth book in the original Goosebumps book series. It was first published in 1994 and receeived a Classic Goosebumps reprint in 2011.

The original 1994 cover illustration features a phantom holding a magenta curtain in the auditorium. The 2011 Classic Goosebumps illustration has the Phantom lying in wait in the trapdoor beneath the stage.

Brooke's best friend, Zeke, has been given the lead role in the school play, the Phantom. Zeke's totally into it. He loves dressing up in the grotesque phantom costume. And scaring the other members of the cast. Brooke thinks Zeke's getting a little too into it. But then really scary things start happening. A message appears on a piece of scenery: "The Phantom Strikes!" A stage light comes crashing down. Is someone trying to ruin the play? Or is there really a phantom living under the stage?

Brooke Rodgers and her best friend, Zeke Matthews, live in the town of Woods Mill. At school, they have been cast for starring roles in the drama club's upcoming play, The Phantom. As huge horror fans, the two can't wait to take part. Brooke has been cast as the play's lead, Esmeralda, while Zeke will be playing the titular phantom. A fellow student named Tina Powell is cast as Brooke's understudy, but Tina seems jealous.

During the play's first rehearsal, Tina tells everyone that the play is cursed. Their teacher, Mrs. Walker, explains; long ago, when the school first put on the play, the boy set to play the Phantom vanished just moments before the play began. Despite a thorough search for the boy, he was never found. All the sets and scripts for the play were destroyed except for one that was hidden away. Tina tells the group that the boy became a real phantom, and he continues to haunt the school, thwarting any attempts to put on the play. Mrs. Walker attempts to reassure the children it's all just a story, but the tale seems to frighten the entire cast. Mrs. Walker reveals a trap door that leads to below the stage. She tells the class it was created during the original production of the play so the phantom could appear and vanish during the course of the story. Mrs. Walker hopes it can be used once more, but it needs some renovations first.

The Phantom is about a theater owner named Carlos. In the basement of his theater, there is a deformed phantom who hides his scarred face behind a mask. Carlos' daughter, Esmeralda, falls in love with the phantom, but her boyfriend Eric finds out and kills the masked man. The Phantom remains as a ghost to haunt the theater forever.

After the play's cast disbands for the day, Brooke and Zeke stay behind to investigate under the stage. There isn't much to find except a maze-like series of dark, cramped corridors. As they go back up to the top of the stage, they run into a strange old man. He introduces himself as Emile, the school's night janitor. He questions what the kids were doing snooping around beneath the stage, and he warns them of the dangers of exploring the trap door. The following day Brooke finds a new boy sitting in her seat. He introduces himself as Brian Colson, and he claims he's just moved to the school from Indiana. Brian seems eager to join the play, and Brooke allows him to accompany her to play practice to see if he can get a part. Later, Brooke opens her locker to discover one of Zeke's monster masks inside. Dangling from the mask is a note scribbled in red crayon. It reads: "STAY AWAY FROM MY HOME SWEET HOME." Brooke quickly accuses Zeke of trying to scare her, but he denies having anything to with it.

During the play's rehearsal, Brian asks Mrs. Walker for a potential role in the play. He is disappointed to discover he's a few days too late, but he is allowed to work as a part of the scenery crew with Tina. Brooke sits down and begins to read her script when the lights go out. A shrill scream is heard, and a masked man swings down from the catwalk into the trap door. Brooke once again thinks the culprit must be Zeke. However, after school, Zeke tells Brooke that he wasn't at the rehearsal due to a dentist appointment. Brooke begins to wonder if Tina could be trying to sabotage her in order to get the part.

The next day, the phantom appears again. He rises from the stage and grabs hold of Brooke. He violently shakes her and warns her to stay away from his home. Brooke realizes the figure isn't Zeke just before he vanishes through the auditorium doors. The encounter leads Zeke to believe there really is a phantom haunting the school, and he becomes eager to get to the bottom of what's going on. The following day, Brooke follows Zeke into the principal's office. Zeke asks the secretary if Emile has any useful information. The secretary reveals nobody named Emile is employed at the school, and the school doesn't even have a night janitor. They tell her of their run-in with Emile, but she doesn't seem to believe the story. After school, Brooke and Zeke talk Brian into accompanying them while they investigate the school. The three enter the auditorium and discover the play's backdrop has been vandalized with red paint. On it is splattered the same message Brooke saw on the note in her locker. Mrs. Walker enters the room, and she is shocked at what she sees. She scolds the kids for sneaking into the school and accuses them of vandalizing the set. Mrs. Walker discovers a trail of red paint marks in the hall that lead to Zeke's locker, and there is a fresh can of red paint inside. Zeke swears he's not responsible, but Mrs. Walker is unconvinced and removes him from the play.

Brian and Brooke meet up with the now grounded Zeke, and he's more eager than ever to catch the Phantom and prove his innocence. The three head back to the school and take the trapdoor down to below the stage. They travel down a tunnel and discover a room that seems to be inhabited by someone living beneath the school. They find a fresh bowl of cereal sitting out, and realize the phantom must be nearby. Their investigation is cut short by an angry Emile. He reveals himself to be a homeless man who had taken to living beneath the stage. He tells them he tried to warn them to stay away from his home, but they didn't listen. Brooke asks if he's the boy who died during the play, but Emile is confused. The three run away from the man and are rescued by Zeke's father, who had traveled to the school as soon as he discovered Zeke was missing. Zeke's dad calls the police, and they arrive later on. While they are unable to find Emile, Zeke is ultimately given his part back in the school play.

Before long it is finally the night of the play. Brooke waits for Zeke to arrive on stage. The trapdoor rises and the Phantom emerges. Looking into his eyes, she can tell instantly it isn't Zeke. The Phantom begins to go off-script and tells the crowd about the night he died, when he plummeted to his death by falling through the stage's trapdoor. He claims to be the boy who went missing many years ago, but he's returned to play his greatest role. Brooke approaches the Phantom and tears his mask off, but his face is obscured by darkness. He staggers back and falls through the trapdoor. The audience claps and cheers, thinking this all was part of the show. Zeke eventually emerges from the trapdoor and says he was knocked out by someone earlier.

Brooke and Zeke head to Brooke's locker, and she opens it, looking for her coat. To their surprise, an old yearbook falls out. The book is dated from the 1920s. She turns to a bookmarked page, and there is an article detailing an upcoming play called The Phantom. The kids quickly look to see who was cast in the starring role, and they discover the identity of the boy who vanished in the original play: Brian.

For the stage musical adaptation, visit the musical page. 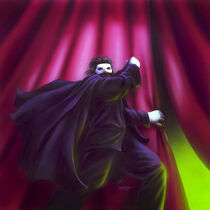 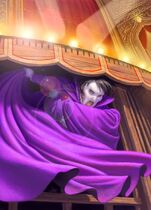 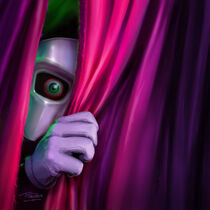 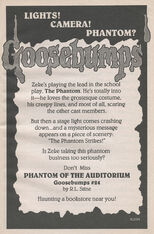 Book advertisement from Return of the Mummy.