Many years ago, Oswald and his brother, Martin, who were a wicked pair burned down half of their town called Highgrave and killed many citizens in the process. To make it worse, they also started the fire for fun, which had the authorities put them on the hanging tree for their crimes and nature. However, after he was buried, Oswald became a Graveyard Ghoul and like many of the dead in Highgrave, he could not sleep, so he would step out of his grave at night. He and Martin share the grave, which has a double tombstone with a crow on top. And under the crow was a warning telling others about disturbing their rest at their own peril, meaning that Oswald and his brother would have to punish whomever disturbed them.

Oswald is highly sadistic, with a cruelness so deep that some say that he and his brother were pure evil. He is very destructive and would not hesitate to destroy whatever is in sight. He proved to be determined to have a big strong body, as he hated Spencer's scrawny one. And Oswald would never let anyone stand in his way while he is causing destruction.

It is unknown if Oswald is one of the ghouls that appeared in the Goosebumps movie. 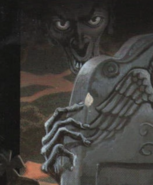 Oswald Manse as depicted on the French cover of Attack of the Graveyard Ghouls.
Community content is available under CC-BY-SA unless otherwise noted.
Advertisement