Goosebumps Wiki
Register
Don't have an account?
Sign In
Advertisement
in: Books, Give Yourself Goosebumps Special Edition, Animals,
and 7 more

The Curse of the Cave Creatures
One Night in Payne House is the fourth of the special editions of Give Yourself Goosebumps. It was published in 1998.

TALK ABOUT BEING IN THE DOGHOUSE!

So ready or not you’ve got exactly one chance to survive. All other paths point to THE END. Your end! Because roaming through Payne House is a giant dog-beast who wants to put a choke-chain leash—on you! Not to mention the drooling Tongue Thing that’s having a major snack attack!

The choice is yours in this scary GOOSEBUMPS adventure that's packed with over 20 super-spooky endings ― but only one way out!

It's Halloween night and the story starts with you and your friend, Trevor, sitting in your bedroom preparing for tonight's dare. You two decide to spend the night in Payne House, an abandoned house in your neighborhood that's famous for being the set of your favorite horror movie. While Trevor has never seen the Payne House film before, that doesn't stop you both from going through with the dare. The horrific elements of the movie, however, turn out to be real. Similar to Trapped in the Circus of Fear, the book forces you to choose only three out of eleven items before starting adventure, but is far harsher, as bringing only one incorrect item makes it impossible for you to survive the book. Failure is also guaranteed should you deviate from the correct route through the book. It is also possible to collect more items in the house.

There are twenty-two bad endings and only one ambiguously good ending. 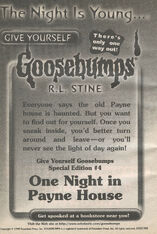 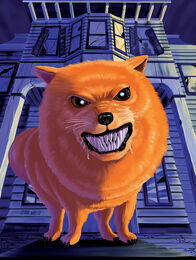