One Day at HorrorLand (TV episode)

"The Haunted House Game"
"One Day at HorrorLand" is the eight and ninth episode of season three of the Goosebumps TV series, and the fifty second and fifty-third episode overall. Part one and part two premiered on October 25, 1997 and November 1, 1997 on Fox during the Fox Kids block respectively.

Out on a fun-filled road trip to Zoo Gardens, the Morris family' amusement soon turns to amazement when bright lights flash across the sky. They suddenly find themselves in HorrorLand—where admission is free, but the fun never starts. After a narrow escape from the house of mirrors and a chilling whitewater coffin cruise, Luke and Lizzy rejoin their parents at the front gate, but it's locked! Now their only hope is to compete in a gruesome game show that proves what the world has feared all along: monsters really do exist... and they have their own cable channel. 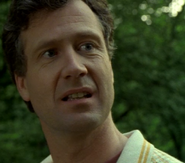 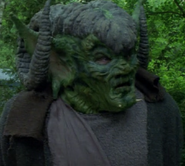 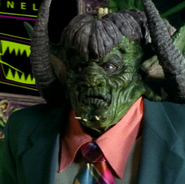 A Horror with the head of a still-alive female.

The Horror TV Show host with the Morris Family.
Community content is available under CC-BY-SA unless otherwise noted.
Advertisement