On Halloween night, prankster Brandon Plush and his best friend, Cal, break into the house of their teacher, Mr. Benson, as part of a revenge scheme. However, things don't go as planned. Mr. Benson arrives back home as they are in the middle of trashing it, his two guard dogs in tow. The two run away, but Cal is left stuck in a window. Rather than risk getting caught, Brandon leaves Cal behind, and leaps across Raven's Ravine, a steep cliff in Mr. Benson's backyard.

Now on the other side, Brandon finds himself in a strange, dark neighborhood. There, he meets Norband, a boy wearing a green monster mask identical to his. Norband invites Brandon to a Halloween party across the street, where he meets several of Norb's friends, all children in costumes. The party seems normal until the partygoers turn aggressive on Brandon. They force him to eat a doughnut filled with worms, and bob for apples in a barrel of cockroaches. Norband and his friends swarm and chase after the terrified Brandon, who eventually makes it back to the ravine, only to find his own body waiting at the bottom.

Norband explains that Brandon didn't survive his jump across, and is now on the other side. Now, he knows what it's like to be afraid. Brandon begs for a second chance, and Norband tells him the only way to do so is to help three frightened people in need. He shoves Brandon back across and gives him an hour to redeem himself.

Brandon does as told. He helps Cal, his cousin, Vinnie, and sister, Maya. However, all his effort turns out to be for nothing. Norband tells him this was all a big joke. He tears off his mask to reveal no head underneath. His other friends do so as well, revealing hideously decomposed ghouls. Norband explains that for Halloween this year, he went as Brandon. Even his name, Norband, is simply Brandon rearranged. Now, Brandon is stuck with them on the other side forever.

However, Brandon, realizing it's still Halloween, decides that he and the other ghosts should go back across the ravine and begin some real scaring.

Norband is a dark reflection of Brandon. Both take delight in scaring others. He wants Brandon to know what it's like to be on the other side of fear, like his victims do. His whole offer of giving Brandon a second chance at life is just a cruel Halloween joke.

Brandon describes Norb as wearing a faded denim jacket and baggy black jeans. On his face he wears a green monster mask, only a pair of menacing eyes visible. When Brandon pulls it off, he sees his own face, which is really just another mask. Under that, Norband is completely headless. 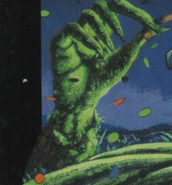 Norbands' hand as depicted on the French cover of Headless Halloween.