Nila Rahmad is the main villain from the twenty-third Goosebumps book, Return of the Mummy, and its television adaptation.

Nila is Prince Khor-Ru's thousands-year-old sister posing as a journalist. Her goal was to reanimate her mummified brother to reign with him again. Unfortunately for her, Khor-Ru wants to rest in peace, so he tried to choke her to death when she awakened him. At the end, she is transformed into a scarab. 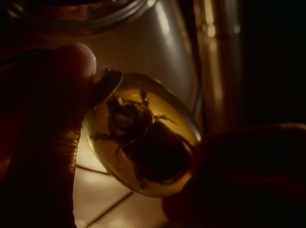 Nila as a scarab
Add a photo to this gallery
Retrieved from "https://goosebumps.fandom.com/wiki/Nila_Rahmad?oldid=135400"
Community content is available under CC-BY-SA unless otherwise noted.