"Return of the Mummy"

"Night of the Living Dummy II" is the tenth episode of season one of the Goosebumps TV series. It premiered on January 12, 1996 on Fox during the Fox Kids block.

Amy is tired of being a middle child. Her older sister, Sara, gets to do whatever she wants and her younger brother, Jed, gets away with everything! Family Nights are the worst -- Sara is good at everything, and Jed makes everyone laugh. It seems like Amy can't do anything right. When Amy gets a brand new dummy named Slappy, she may finally have a chance to shine. While Amy's act with Slappy is getting better, life is getting stranger. There is something eerie about this dummy. Then, horrible things begin to happen around the house. Her family blames her, though Amy insists she is not responsible and that Slappy is! But who would believe that a wooden doll can come to life? 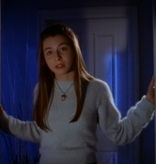 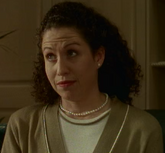 Slappy the Dummy
Add a photo to this gallery

Add a photo to this gallery
Retrieved from "https://goosebumps.fandom.com/wiki/Night_of_the_Living_Dummy_II/TV_episode?oldid=134632"
Community content is available under CC-BY-SA unless otherwise noted.