Goosebumps Wiki
Register
Don't have an account?
Sign In
Advertisement
in: Books, Slappy, Night of the Living Dummy Books,
and 13 more

This is the first book where Slappy is the lead villain. After this book, Slappy becomes the main antagonist of the Living Dummy books (except in Slappy's Nightmare and The Dummy Meets the Mummy!).

The original 1995 cover illustration shows Slappy the Dummy sitting at the foot of a pink bed, alongside two stuffed toy animals with frightened expressions on their faces.

The 2015 Classic Goosebumps cover illustration depicts Slappy sitting by Sara's bedroom closet with a sinister look on his face. Red paint is smeared all over the walls. Paint is all over Slappy's hands and a paintbrush is by his side.

Amy's ventriloquist dummy, Dennis, keeps losing his head...for real. So Amy begs her family for a new dummy. That's when her dad finds Slappy in a local pawn shop. Slappy's kind of ugly, but Amy's having fun practicing her new routine. Then terrible things start happening. Horrible, nasty things. Just like what happened the first time. Because there's something odd about Slappy. Something not quite right. Something evil...

Amy Kramer is performing a small ventriloquist act as a part of a family talent show. Amy is performing with her ventriloquist dummy, Dennis. Unfortunately, since the dummy is a bit old, during her performance, Dennis's head falls off. Amy's siblings, Sara and Jed, laugh at her, causing Amy to ask her father to buy her a new ventriloquist dummy. After this, Sara shows her family her new watercolor painting, but she is disgusted to discover that someone has painted a red smiley face on her artwork. Jed admits that he is the culprit, and he is punished. Later, while Amy is in her room, she sees Dennis's head looking at her through the window. It turns out that Jed placed it there. Jed wanted to scare Amy because she didn't defend him after he vandalized Sara's painting.

The next morning, Amy's friend, Margo, visits her. Margo asks Amy to perform with Dennis in her father's restaurant to entertain some of the guests. Later that day, Mr. Kramer comes home with a gift for Amy: a new ventriloquist dummy named Slappy. Amy finds a moldy sandwich in Slappy's head and speculates that it's the dummy's brain; Mr. Kramer throws the moldy item away. While Mr. Kramer examines Slappy, Amy finds a small card in his pocket and reads it aloud: "KARRU MARRI ODONNA LOMA MOLONU KARRANO." Shortly after reading the phrase, Amy thinks she sees Slappy blink. Amy tells her father, but Mr. Kramer is skeptical, saying that the dummy could possess a blinking mechanism. Suddenly, Slappy slaps Mr. Kramer on the cheek, and Mr. Kramer assumes that Amy did this. She denies the accusation but apologizes anyway.

Amy tells Margo that she will be able to perform at her father's restaurant because she has received a new dummy. After this, Amy starts spending more time with Slappy than with Dennis. During another family talent show, Amy performs with Slappy. However, Slappy insults Amy's parents, making them angry. She tries to tell them that Slappy is talking on his own, but her parents don't believe her. Amy apologizes and goes to sleep a little angry and confused.

Sometime later, Amy is working on a science project for school. Since Sara isn't home, Amy enters Sara's room to pick up some markers for her project by herself. She notices Slappy lying near the door. When Sara returns, she finds her room completely destroyed and all of her paintings ruined. While he is initially accused of the vandalism, Jed says that he isn't responsible, and he says that he saw Amy enter Sara's room. Sara accuses Amy of being the culprit, so Amy is punished. Strangely, she notices paint on Slappy's shoes. That night, the whole family gathers to decide what to do with Amy. She insists that Slappy had something to do with the vandalism in Sara's room. Amy's parents ponder taking her to a psychiatrist, but they ultimately decide to punish her for two weeks. Still, Amy's parents allow her to perform at Margo's father's restaurant, but Amy feels a bit uncomfortable with Slappy.

On the day of her first performance at the restaurant, Amy is assigned to entertain at a birthday party for a girl named Alicia. Amy asks Alicia if she would like to shake Slappy's hand. When Alicia shakes his hand, Slappy holds her tightly and doesn't let go. Slappy laughs evilly, and Alicia starts crying. Alicia's mother calls Margo's father to tell him that she is going to sue his restaurant. Margo tells Amy to leave. When Amy gets home, she throws Slappy in her closet.

Later that day, Sara discovers that all of the walls in her room have been scrawled with Amy's name, written repeatedly in red paint. Slappy is lying near a wall with a brush, but Amy's parents think she placed the dummy in the room. Worried about Amy's behavior, her parents leave. Amy shouts angrily at Slappy, but Slappy simply laughs cruelly. Amy vows to catch Slappy moving on his own and expose him. After dinner, Amy is going to her room when she sees Slappy leaving her closet and heading for Sara's room. Amy stops Slappy, but she is discovered by Sara. Sara thinks Amy is trying to destroy more of her belongings.

That night, Amy watches Slappy exit her closet. She asks the dummy to explain himself. Calmly, Slappy tells her that because she read the card in his pocket aloud, she is now his slave. Slappy threatens to destroy more of her family's belongings if she doesn't do what he says. Furious, Amy locks Slappy in the closet and goes to ask Sara for help. To Amy's surprise, Sara reveals that she already knew that Slappy was alive. She had seen him destroying her room, but she was afraid to tell her parents because they likely wouldn't believe her. Together, the sisters grab Slappy and throw him down a sewer. However, he returns the next morning.

The sisters formulate a plan: they decide to dress Jed as Dennis in order to surprise Slappy while their parents watch. The scheme goes as planned until "Dennis" bashes Slappy's head against Sara's bedpost, breaking it in half. A worm-like creature comes out of the dummy's broken head and wriggles away through a crack in the wall.

Amy's parents apologize to her for not believing her. The family, wanting to congratulate him, looks for Jed. It turns out that Jed had fallen asleep and forgot to disguise himself as Dennis. The whole Kramer family is silent and they wonder who killed Slappy. 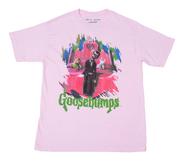 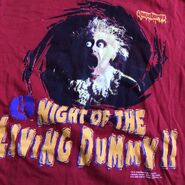 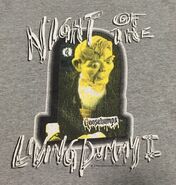 Night of the Living Dummy II was adapted into an episode of the Goosebumps TV series. It is the tenth episode of season one. 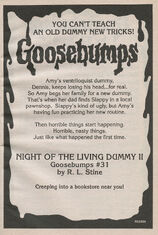 Book advertisement from It Came from Beneath the Sink!. 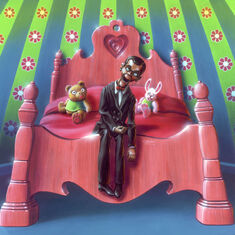 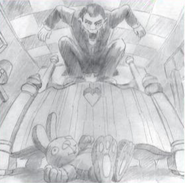 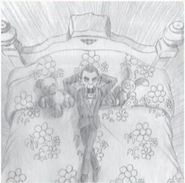 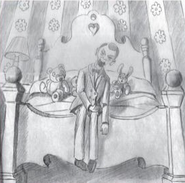 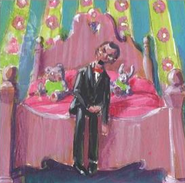