Goosebumps Wiki
Register
Don't have an account?
Sign In
Advertisement
in: Books, Slappy, Night of the Living Dummy Books,
and 18 more

Both the original and the Classic Goosebumps cover illustrations depict Slappy the Dummy evilly staring at the reader, his mouth agape.

Lindy names the ventriloquist's dummy she finds Slappy. Slappy is kind of ugly, but he's a lot of fun. Lindy's having a great time learning to make Slappy move and talk. But Kris is jealous of all the attention her sister is getting. It's no fair. Why does Lindy have all the luck? Kris decides to get a dummy of her own. She'll show Lindy. Then weird things begin to happen. Nasty things. Evil things. No way a dummy can be causing all the trouble. Or is there?

Lindy and Kris Powell are walking through their neighborhood. The two girls decide to inspect a house that is under construction. While searching through a garbage container near the house, Lindy finds a mysterious ventriloquist's dummy and decides to call him Slappy. Lindy uses her dummy to gain popularity, and Kris quickly becomes jealous. Since some of the neighborhood kids seem to love her ventriloquism, Lindy decides to start using Slappy for children's acts and birthday parties. Lindy and Kris's parents ask the two girls to share the dummy. However, when Kris tries to take Slappy from Lindy, Slappy hits Kris in the face.

The next morning, Mr. Powell reveals that he has bought a ventriloquist dummy for Kris from a pawn shop. She decides to call him Mr. Wood. Mrs. Berman, Kris's music teacher, asks her to perform a ventriloquist act for the school's upcoming spring concert. Lindy offers to help Kris improve her act, but Mr. Wood, currently being held by Lindy, begins hurling insults at Kris. Kris assumes that Lindy is the one speaking, but Lindy insists that she isn't controlling the dummy. That night, Lindy and Kris hear strange noises coming from inside their house. When they go to investigate, they find Mr. Wood strangling Slappy. When the sisters tell their mother what happened, Mrs. Powell doesn't believe them and tells the girls to go to bed. Kris continues to hear noises coming from the kitchen throughout the night. Kris ventures to the kitchen and sees Mr. Wood lying near the refrigerator with food around him. Before Kris and Lindy can clean everything up, Mrs. Powell goes downstairs and sees the disarray. Both girls try to convince their mother that Mr. Wood is responsible for the mess, but Mrs. Powell threatens to take Slappy and Mr. Wood away if the girls keep insisting that Mr. Wood is alive.

While the girls clean up the mess, Lindy reveals to Kris that she is the one who has been doing all these horrible things. She was tired of Kris being a copycat, so she decided to pull this big prank on Kris. She mocks Kris for buying it. Kris is infuriated, but doesn't tell their Mom about this, as they have been banned from talking about the dummies. A couple of days later, Kris finds a small card in Mr. Wood's pocket that reads, "KARRU MARRI ODONNA LOMA MOLONU KARRANO,". After reading the card out loud, Kris thinks she sees Mr. Wood blink.

That night, the Powell's elderly neighbors, Mr. and Mrs. Miller, come to visit them. Lindy and Kris's parents ask that their daughters perform a ventriloquist act for their neighbors. Lindy decides to go first, and hers is a success. Before Kris can perform her act, Mr. Wood begins to insult the elderly couple, making fun of their appearances and their breath. Because of this, Kris is grounded but still allowed to attend the school's spring concert the following day. At the concert, while Mrs. Berman is adjusting a microphone for Kris, Mr. Wood begins to insult the teacher for being overweight. Mrs. Berman demands an apology, but Mr. Wood responds by spewing a green substance on the teacher and the audience. Mrs. Bergman tells Kris that she will be suspended from school for this, possibly for life.

Mr. Powell announces he will return the dummy to the pawn shop on Monday. Kris locks Mr. Wood in a closet and goes to sleep. Kris is awakened by the sound of footsteps. When Kris decides to investigate, she discovers that Mr. Wood is alive. Mr. Wood tells her that she and Lindy are now his slaves and that the magic words brought him to life. Kris tries to fight the dummy, but Mr. Wood hits her fiercely in the stomach. Kris crawls away from Mr. Wood and screams for help. Lindy hears her sister and goes downstairs to find out what has happened. While Kris tells her sister that the dummy is alive, Mr. Wood surprises the girls. Lindy manages to pin the dummy to the ground and keep him from fleeing. When the girls' parents arrive, Mr. Wood stops moving. Lindy and Kris try to explain what has happened, but their parents refuse to believe the girls. Mr. and Mrs. Powell begin to question Kris's mental well-being, suggesting that they should take her to a doctor. As soon as the parents leave, Mr. Wood comes back to life, insisting that Lindy and Kris are his slaves.

The girls try to decapitate the dummy, but they are unable to harm him. Next, the girls trap Mr. Wood in a suitcase and bury him in the backyard. Since they are exhausted, Lindy and Kris go to sleep. When the girls wake up the next morning, they discover that Mr. Wood has freed himself and is waiting for them. Lindy and Kris seek help, but their parents have gone out. To show how serious he is, Mr. Wood begins to choke Barky, the family dog. In an attempt to separate the two, the girls drag Mr. Wood and Barky outside. When Mr. Wood releases Barky, the girls chase the dummy into the path of a nearby steamroller being used for construction at the house next door. Mr. Wood dodges the first steamroller and tells them that both will be his slaves forever. He doesn't notice the second steamroller, however, and it crushes Mr. Wood. A mysterious green mist rises from the smashed dummy's body. The alarmed driver of the steamroller rushes out, thinking it was a kid he ran over, but the kids assure him it was nothing more than a dummy.

Lindy, Kris, and Barky return home. When the girls get to their room, they find Slappy waiting for them. Slappy asks if the other dummy is gone.

Night of the Living Dummy was adapted into a Goosebumps Graphix story by Dave Roman in 2015 as the fourth story in Slappy's Tales of Horror. There were some changes, including: 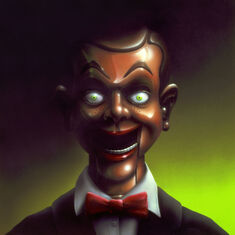 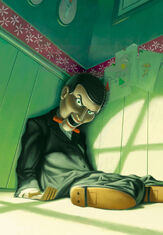 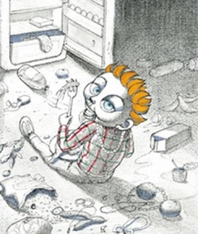 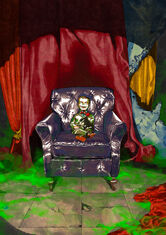 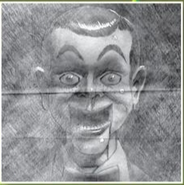 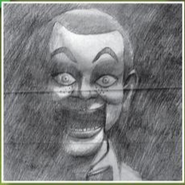 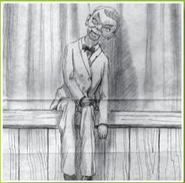 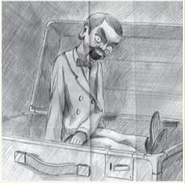