Goosebumps Wiki
Register
Don't have an account?
Sign In
Advertisement
in: Books, Give Yourself Goosebumps, Cats,
and 10 more

Invaders from the Big Screen
Night of a Thousand Claws is the twenty-eighth book in the Give Yourself Goosebumps gamebook series. It was published in 1998.

The cover illustration depicts the inside of a house with a window looking out upon a lighthouse in the background. In the foreground, a cat girl with long fingernails is grinning as she is preparing to strike.

You arrived on Cat Cay Island today. And it's already a cat-astrophe! You should have listened to that cabdriver's warning: Never go outside after dark!

But your brother Sam has disappeared. And it's up to you to save him- and yourself. From the hundreds of evil mutant cats dying to get their claws on you. And from Katrina the Cat Woman' who wants to make you—or your parents—the next Keeper of cats!

You and your family go on vacation to Cat Cay Island, which is inhabited by strange cat-like creatures. You are told not to go out at night, but you're forced to do so when one of your younger brothers goes missing. You and your other brother find the missing brother in a lighthouse. In there, a man warns you about the cats being evil and that you should stay in the lighthouse. You must then choose whether to stay in the lighthouse or to leave, and it is that choice that the two main storylines are separated. There is some randomization and a puzzle included to further the plot along with the choices you make.

You decide to leave the lighthouse and run from the man, but your brothers spot some cats moving towards the sand dunes, and you all decide to investigate. You witness hundreds of cats taking part in a ritual with Katrina Madd, the "Keeper of the Cats" - but her time is coming to an end, and she needs to find a replacement. It's up to you to find out what the cats are planning and stop them.

You stay in the lighthouse but get trapped as the cats break in. The man (Jacob Madd) is injured by the cats, and tells you to "go to the light" - but you don't know what he's talking about. You and your brothers have to escape while evading the cats, and the booby traps that Jacob set up for protection.

From story A, rather than follow the cats, you decide to just go home. You notice that a pair of black cats are following you, but you don't think anything of it - until you're warned that it's unlucky for a black cat to cross your path. You and your brothers try to enjoy the day, but have now been cursed by the cats. There is no good ending to this Side Story.

There are twenty-two bad endings, three ambiguous endings, and one good ending. 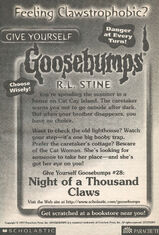 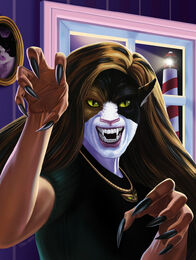