Beware of the Purple Peanut Butter
Night in Werewolf Woods is the fifth book in the Give Yourself Goosebumps gamebook series. It was published in 1996.

The prismatic hologram design consists of purple-red with a hint of blue colored circles connected by diamonds. The cover illustration consists of vicious werewolves howling and snarling inside a forest clearing. In the background, one werewolf is howling on a cliff, with the full moon behind it.

Get out your bathing suit! You and your family are off on a summer vacation to a place called WoodsWorld. You can't wait to mess around down at the lake. Then at the Kids only Campfire you hear the rumor about WoodsWorld. Legend has it, werewolves roam the woods at night. But you're not scared. You're ready for adventure.

Will you explore the deepest, darkest part of the woods? Brave the Tunnel of Waves, home of the terrifying lake monster? Or battle an army of red fire ants? The choice is yours in this scary GOOSEBUMPS adventure that's packed with over 20 super-spooky endings!

You are vacationing at WoodsWorld, a resort in the middle of the woods, accompanied by a dorky family friend, Todd Morris. Todd's box of Pewter figurines is stolen from him by a band of bullies named the Murphy Brothers and he begs you to get them back for him. You go to the Kids Only Campfire to do so and hear Sharky Murphy tell the legends of the Werewolves of WoodsWorld. The legend says that the wolves will leave at dawn, and that you must get the box before the wolves come out. You attempt to get the box and must face a pack of angry werewolves, and discover that Todd is one of them, or face a lake monster, fight off trolls, or battle an army of fire ants.

Norwegian (Natt i varulvskogen - Night in the Werewolf Forest) 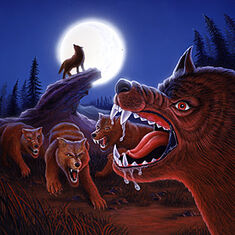 Retrieved from "https://goosebumps.fandom.com/wiki/Night_in_Werewolf_Woods?oldid=152853"
Community content is available under CC-BY-SA unless otherwise noted.