"Night of the Living Dummy II"

"Stay Out of the Basement"

"My Hairiest Adventure" is the thirteenth episode of season one of the Goosebumps TV series. It premiered on January 19, 1996 on Fox during the Fox Kids block.

Larry Boyd is having a bad day. He's been chased by dogs, his band sounds pathetic, and his allergies seem to be getting worse. It's not just a bad day, it's a bad hair day. Suddenly he is growing thick, long hair on his arms and legs. Even more troubling, his friends seem to be disappearing. Could that old bottle of Instant -Tan they used could that have something to do with these strange occurrences? Can Hairy Larry get to the bottom of this before he ends up like the rest of his friends: hair one day, gone tomorrow?

Larry is chased by a pack of dogs and up a tree.

Larry’s friend, Lily, shoos the dogs away. She has two different colored eyes.

Larry practices with his band.

The four of them find a bottle of Instant Tan, and they put some on.

Larry notices a ton of hair on his hand.

Larry and Lily go to check on Manny to find his house completely empty.

Larry and Lily find a man in Manny’s bedroom closet who says he is selling the house.

Larry finds even more hair on his arms while eating dinner at Lily’s house.

Larry assumes that the Instant Tan caused all of the hair to grow.

Larry finds a dog that has the same two eye colors as Lily.

Larry asks Lily’s parents what happened to her, and they tell him that there is no Lily.

Larry arrives at his band audition to find a dog that resembles Jared.

Larry grows hair onto his face.

Larry and his friends are revealed to be dogs, and Dr. Murkin had been injecting them with medicine that would keep them human for up to 12 years.

Dr. Murkin turns the Boyd’s cat, Jasper, into a human.
Add a photo to this gallery 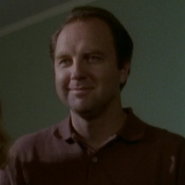 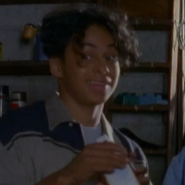 Carl Summers and his son

Jasper
Add a photo to this gallery

Retrieved from "https://goosebumps.fandom.com/wiki/My_Hairiest_Adventure/TV_episode?oldid=150983"
Community content is available under CC-BY-SA unless otherwise noted.