A Night in Terror Tower
My Hairiest Adventure is the twenty-sixth book in the original Goosebumps book series. It was first published in 1994.

The cover illustration features Larry looking at the mirror in the bathroom, noticing his arms and parts of his face covered with blackish hair.

Larry Boyd just found the coolest thing in the trash. It's an old bottle of INSTA-TAN. "Rub on a dark suntan in minutes"—that's what the label says. So Larry and his friends do. But nothing much happens. Until Larry notices the hair. Dark, spikey [sic] hair growing on his hands and face. Really gross shiny hair. Hair that keeps growing back even after he shaves it off...

Twelve-year-old Larry Boyd is running from a stray pack of dogs. This situation has happened more than once to Larry; dogs always seem to chase after him. Before they can gang up on him, the dogs are shooed away by Larry's best friend, Lily Vonn. Lily is a short and cute blonde girl who always wears a gold coin around her neck. The strangest feature about Lily, however, is her eyes. One is blue while the other is green. The two enter Lily's garage where their others friends, Manny, Jared, and Kristina, are waiting. The five of them are all in band called The Geeks and have been prepping for their school's Battle of the Bands, set to take place in the upcoming weeks. Their rival is a group called Howie and the Shouters, led by the obnoxious Howie Hurin and his sister, Marissa.

The Geeks practice for several hours before heading out to play in the snow. They start to build a snowman when Larry spots a junk pile next to a nearby dumpster. Larry paws through the pile and finds an enamel medicine chest. He opens it and pulls out an orange bottle of lotion. The label reads: "INSTA-TAN. RUB ON A DARK SUNTAN IN MINUTES." Larry rushes to show his friends. Manny thinks they should try it out, as it could give them great tans, and everyone agrees. The kids begin applying the formula, but Larry notices the lotion expired several years ago. His friends assure him there's no danger, and Larry reluctantly applies the lotion as well.

As time passes, Larry feels himself growing sick. His vision grows hazy, and he collapses. Larry is taken to Dr. Murkin, who administers him a shot. He explains to Larry's parents their son's sickness was the result of overheating, caused by weak sweat glands. Due to this, Larry has to have a shot every two weeks. Larry arrives home and begins to get ready for bed. He goes to brush his teeth, but notices a thick patch of dark hair has grown on the back of his hand. Larry panics, but successfully shaves the hair off. He begins to wonder if the expired bottle of Insta-Tan could be responsible.

The next morning, Larry walks to school with Lily and asks her if she's grown any strange hair as well. Lily begins to laugh and tease Larry. She calls him her personal nickname, Hairy Larry. At school, Larry has to do a book report in front of the class. As he walks up to the front of the room, he is tripped by Howie. As he falls, he notices thick, black hair is now growing on both of his hands. Larry runs out of the room, and to his locker. From there, he grabs a pair of gloves and hides the hair beneath them. He skips band practice and heads straight home. He cuddles with his yellow eyed cat, Jasper, but she seems frightened by his hairy hands. He heads back into the bathroom and shaves the black hair off his hands once again.

The next day, Larry asks his friends about the Insta-Tan, and they all complain about how it didn't work, not mentioning any hair. At Gym Class, Larry notices the dark hair has begun to grow from his knees, and hides it beneath his jeans. After school, Larry and his friends want to practice, but they can't find Manny. Larry and Lily venture to Manny's house, but — to their shock — discover his house completely empty. While walking back, Larry and his friends run into a dog with long hair, reminding them of Manny. Larry wonders why Manny would move without saying goodbye.

On Saturday morning, Larry is with his father and decides to reveal everything that has been happening. When Larry mentions the growth of hair, his father becomes frightened and rushes him to Dr. Murkin, who administers another shot. Larry asks Dr. Murkin if the Insta-Tan could have anything to do with the hair growth, but the doctor denies this. The next day, Larry once again questions his friends about the Insta-Tan. He asks them if they've been growing hair. In response, Jared and Kristina laugh and mock Larry. Lily, however, grows quiet and looks away, seemingly avoiding the question. The next morning, Larry wakes up to find his forehead covered in hair, which he quickly and painfully shaves off.

At school, Larry finds that Lily has not shown up. Larry tries to phone Lily, but he receives no one response. When Larry arrives back at home, he realizes he's been followed home by a dog he doesn't recognize. Looking it over, he realizes the dog is wearing Lily's gold coin around its, and, stranger still, it has the same eyes as Lily, one green and one blue. Larry freaks out and runs to Lily's house in search of answers. He asks Lily's mother if he can see her, and she immediately tells Larry that no one named Lily lives there. She grabs ahold of Larry, her eyes full of tears, and says there never was a Lily, and Larry needs to forget about her.

With Lily now gone, Kristina takes her place as the lead singer. Finally, the Battle of the Bands arrives. Howie and his band play first, and they sound great. Before long, it is The Geeks turn to play. Their performance starts out shaky and is given only mild applause. As they move on to their next song, the crowd begins to cheer. Larry realizes they aren't cheering at the music; they are cheering at the sight of his growing hair. They think it's all special effects. Larry and his band win the battle, but Larry is too embarrassed to accept the trophy and runs back home. Larry shows his parents the hair he's growing. They look at him tearfully and reveal the truth: Larry is growing the hair not because of the Insta-Tan, but because he's not human. He is a dog.

Dr. Murkin performs tests on animals, and he created a serum that can turn dogs into children, allowing them to think and act just as humans would. However, the serum doesn't last long, which is why Larry had to get it administered via the shots. After his failed attempt, Murkin has stopped testing on dogs, and Larry has reverted to his normal dog self. However, Larry still gets to play with Lily and Manny, who are also dogs.

One day, Larry sees Mrs. Boyd's car roll into the driveway. To his surprise, she emerges carrying a baby wrapped in a blanket. She welcomes this new child, Jasper, into their home. As Larry looks at the baby, he sees she has bright yellow eyes, just like his cat.

My Hairiest Adventure was adapted into an episode of the Goosebumps TV series. It is the thirteenth episode of season one. 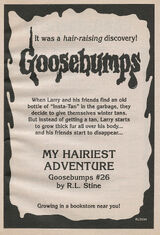 Book advertisement from Attack of the Mutant. 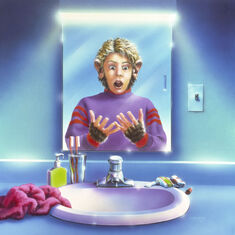 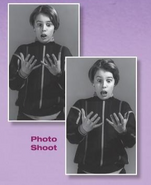