Goosebumps Wiki
Register
Don't have an account?
Sign In
Advertisement
in: Books, Night of the Living Dummy Books, Slappy,
and 14 more

They Call Me the Night Howler!

Monster Blood Is Back
My Friend Slappy is the twelfth book in the Goosebumps SlappyWorld book series, and the fourteenth book in the Living Dummy saga. It was published in 2020.

The cover illustration depicts Slappy the Dummy sitting on the ground wearing a blue-hearted t-shirt that says, "BEST FRIENDS 4-EVER" over his suit.

Barton Suggs has it rough. He only has one friend, Lizzie Hellman. The school bullies are out to get him. And nobody believes him about it! After Barton gets pranked again, he's had enough! So when Barton brings Slappy to life, he's thrilled to find a new "friend" that's willing to help him get revenge on the bullies. Slappy's never had someone like him before. Will Barton's new Best Friend Forever end up his Worst Nightmare Ever?

Barton Suggs is a mostly friendless kid who is often bothered by the two bullies Travis Fox and Kelly Washington. His only friend is Lizzie Hellman, who tends to stick up for him. One day, his class goes on a field trip to the DaffyTaffy factor, which his dad works at. During the tour, the bullies push Barton, causing him to fall into a vat of chocolate. Barton is rescued but Travis and Kelly claim they didn't push him.

The next day, Barton's dad brings him a special present: a ventriloquist dummy named Slappy. He hopes using him will make Barton more confident and less shy. Later that day, Travis and Kelly drop by Barton's house, telling him they have a deal for him: they will stop bullying him and give him tickets to a Crokodile Tears concert, and he does their book reports for them in return. While it sounds appealing, Barton ultimately declines the offer as he doesn't want to be caught cheating. But after they leave, they let loose the neighbor, Mr. Grimm's dangerous dog. Grimm saves Barton, and the bullies deny letting it loose.

This causes Barton to give in and write the reports. They get good grades on the reports but they tell Barton that it was all a trick, they have no plans to hold up their end of the bargain. Barton gets angry and attacks the two, which is seen by their teacher, Mr. Plame. They claim he was not provoked and Barton gets in trouble, being suspended for a week. Dejected, Barton plays with Slappy and notices a slip of paper with strange words written on it, which he reads aloud.

Slappy immediately begins talking. Instead of being scared, Barton is elated. He thinks he has found the perfect way to get revenge on the bullies. Slappy is surprised that someone isn't scared of him but accepts his offer for friendship as long as he can be scary to the bullies. Barton invites Lizzie to show off his plan but Slappy scares her off. Slappy starts using his powers to control Barton, but he still isn't scared and thinks it's a cool trick they can use. Frustrated, Slappy brings some of Barton's old marionettes to life.

While he is scared, he still needs Slappy so he doesn't admit it and even tells him he can be evil too. When Barton gets back to school, he does a report on dummies and Travis gives him trouble afterward. Barton brings out Slappy and he goes to work, using his powers to make him float. Travis eventually agrees to leave him alone but Slappy goes on, putting him high up in a tree.

They leave and a bit later, Travis shows up at Barton's house, along with his dad and a police officer. Travis told them the story, which they didn't believe but they wanted to check anyway. Barton brings out Slappy, who obeys him and does nothing. They then leave, so now Slappy can set his sights on Kelly. They go to his house where Slappy makes Kelly dance wildly, breaking some of his mom's fine china in the process. Barton's plan is over, but Slappy wants to hurt more people. He wants to go after Lizzie next, as he wants to be Barton's only friend.

Slappy forces Barton to go to her house, where he turns her stuffed dogs into giants and makes them explode. Barton tries to get the slip of powers with the words on so he can use them to put Slappy to sleep. However, Slappy gets to it first and tears it up. But it turns out he ate a different slip of paper saying something else, so Barton is able to get to the correct one and read the words. This works, putting him to sleep.

A few days later, the bullies have left Barton alone and Barton's life is looking up. On his way home from school, he walks by the neighbor's dog when he hears the dog speak and say, "Hey Barty, don't you want to be my friend?", although he isn't sure if he just imagined it. 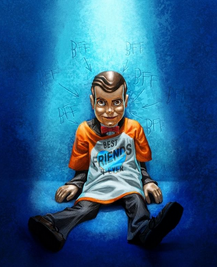