"The House of No Return"
"My Best Friend Is Invisible" is the second episode of the third season of Goosebumps TV series, and the forty-sixth episode overall. It premiered on Fox during the Fox Kids block on September 8th, 1997.

At night in a dark house, Sam and his friend Roxanne are looking in on Sam’s parents who are doing experiments in the basement of their house. The two sneak out and check out Hedge House, a house in the neighborhood believed to be haunted. Sam has reservation on exploring this house, but Roxanne is insistent they check it out to catch a ghost on camera for a school project. Once they enter, Sam doesn’t see a glove drawing a smiley face on a dusty mirror behind him. Sam and Roxanne move deeper into the house and hear strange noises coming from all over. The two see a squeaky cart rolling towards them with a note on it that says “I’m ready for my close up.” Sam and Roxanne head into a room where Roxanne see another notes that says “Boo” but Sam sees a horrible clown face floating down at him.

Back at Sam’s house, Roxanne has the clown mask Sam saw at the house, and teases him with it. Sam goes to sleep that night, but it awoken by noises in his house. Thinking it is his parents, Sam explores the house to see windows open and things moving by themselves. A door opens to his parents’ lab in the basement, and Sam finds his father inside. His father says that he left the windows in the house open, and is working on an experiment to “see things that are hard to see.” When Sam heads back to his room, his room is in shambles, and he calls Roxanne to say that he thinks something followed him home from Hedge House.

The next day, Sam is in his living room with his parents asleep on the couch, and when lightning flashes, they suddenly disappear. Sam tries to find them, but strange things are happening in the house and he runs to his bedroom to hide. He locks the door but sees things moving in his room. His closets doors open and a floating toy disappears into it. Sam goes to follow but see the floating clown mask again. He wakes up to find himself back in his room, but one of his toys moves. Sam stops the toy, but a voice tells him that they were playing with that. Sam talks to voice, and it reveals it is the ghost of the Hedge House, and it wants to be friends with Sam. Sam brings over Roxanne the next day to show off “Brent,” the ghost, to her, but Brent doesn’t show himself. Roxanne gets mad and leaves. When Sam argues with Roxanne at school, he is called to the board to complete math work, and Brent appears to try to “help” Sam, but gets all of answers wrong. Sam blames it on a ghost. At lunch, two kids make fun of Sam for his ghost comment and Brent throws food at the bullies, getting Sam in even more trouble with the bullies. Sam tells Brent that they are not friends, and Brent say he is, in fact, is Sam’s worst nightmare.

Later, Roxanne wishes to go back to Hedge House for the project, where Brent finally reveals himself to Roxanne. The two flee and Sam heads back to his house where Brent follows. Sam tells his parents a ghost is in the house, but they are concerned that something else has found its way into their home. Sam and Brent fight in Sam’s room, and his parents run in with the device they have been working on. They shine it into a corner of Sam’s room and show a person, not a ghost, is behind everything. His parents tell him Brent is a human, one of the last ones that hasn’t been sent to a space colony when Sam’s race of people landed on the planet two years ago. Sam and his parents turn around to reveal faces on the back of their heads, and laugh as they tell Brent not to worry.

"My Best Friend Is Invisible" was released on DVD on September 6, 2005. The DVD also features the episode "An Old Story". 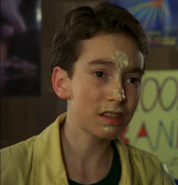 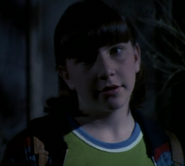 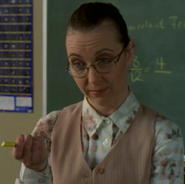 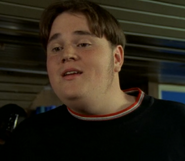