Not seeing is believing!

Not seeing is believing!

The cover illustration depicts an invisible Brent Green having pizza and a soda as Brutus, Sammy's cat, is standing up and screaming in a comical way. Tim Jacobus' signature, which is very difficult to see from afar, is on the bottom part of the pizza box that is facing Brutus. If one looks closely at Brutus' legs, you'll see that they are slightly transparent for reasons unknown.

Sammy Jacobs is into ghosts and science fiction. Not exactly the smartest hobby—at least not if you ask Sammy's parents. They're research scientists and they only believe in real science. But now Sammy's met someone who's totally unreal. He's hanging out in Sammy's room. And eating his cereal at breakfast. Sammy's got to find a way to get rid of his new "friend." Only problem is...Sammy's new "friend" is invisible!

After an argument with his brother, Sammy excuses himself from the dinner table and goes upstairs, saying that Roxanne Johnson, his best friend, is coming over to finish a school project. As Sammy enters his room, he notices his homework is scattered across his bedroom floor. He glances up and finds his window open, even though he is certain that he left it closed. Suddenly, Roxanne steps into his room. After Sammy shuts the window, the two kids start talking about their English project. Roxanne suggests the project be about Hedge House, an abandoned and supposedly haunted house in Middletown. Sammy tries to argue that the house isn't really haunted, but Roxanne doesn't listen to him. A few seconds later, Mr. Jacobs scares the kids by entering the room while carrying a special flashlight. The device is called a Molecule Detector Light. Mr. Jacobs invented the device himself, and it can be used to see invisible things. Sammy's father exits the room, Roxanne goes home, and Sammy goes to sleep. Sammy wakes up in the middle of the night and finds his window open once more.

The next morning at school, Sammy is called on in math class to solve an equation. He walks up to the chalkboard, but he doesn't know how to solve the problem. Unexpectedly, he feels an invisible force grab his hand. The force guides Sammy's arm, solving the problem for him. Sammy leaves the classroom, screaming. After school, Sammy is at home, and he hears noises coming from the kitchen. He goes to the kitchen to see what's going on, and finds a slice of pizza floating in the air. Sammy's mother enters the kitchen, and thinks that Sammy was the one eating pizza, and she scolds him for trying to eat before dinner. Sammy is told to clean his room. When Sammy goes upstairs, he notices that his room has been completely trashed. There are cereal boxes, empty food containers, and crushed juice boxes all over the bedroom.

Suddenly, he hears a voice emanating from inside the bedroom. The owner of the voice introduces himself as Brent Green, an invisible boy. Brent says that he wants to be Sammy's best friend. After Sammy asks Brent a few questions, Roxanne enters his room. Sammy tries to show Roxanne the invisible boy, but Brent remains quiet. Roxanne assumes Sammy is joking. The following day, she tells everyone about Sammy's "invisible friend". This causes the entire school to start making jokes about Sammy, even the teachers. Later that same day, Sammy and Roxanne are getting ready for a school relay race. When the race starts, Sammy begins running, but he hears Brent's voice. Brent is running alongside Sammy, and he says that he wants to help Sammy win the race. Brent then grabs Sammy and starts lifting him, but the invisible boy accidentally drops Sammy. Sammy falls and loses the race, which upsets Roxanne. Sammy tries to get rid of Brent, but he wouldn't leave Sammy alone.

On Saturday, Sammy and Roxanne head to Hedge House, hoping to gather evidence for their English report. They explore the insides of the house for a while, but they start hearing ghostly noises. They go upstairs, where they see chairs and other pieces of furniture floating and being thrown to the floor by an invisible force, which the kids assume to be a ghost. The ghost grabs Roxanne and throws her against the wall. The kids run away from Hedge House.

Once Sammy is he, Brent reveals that he was the ghostly being in Hedge House. Sammy starts yelling at Brent. Mr. Jacobs enters the room and sees his son seemingly yelling at nobody, so he contemplates taking Sammy to a doctor. Sammy rejects this suggestion, and he comes up with an idea to make his parents believe him.

Sammy grabs his father's Molecule Detector Light and points it to Brent, revealing the boy's real body, which Sammy describes as monstrous. Unlike Sammy and his family, Brent only has one head and two arms. He doesn't even have antenna. Brent identifies himself as human, and explains that his parents turned him invisible to protect him. Simon asks if they can keep Brent as a pet, but Mr. Jacobs says that they should send Brent to a zoo, as humans are an endangered species. 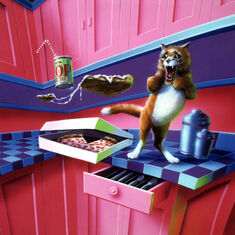 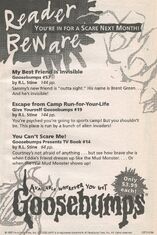 Book advertisement from The Curse of Camp Cold Lake. Also advertises Escape from Camp Run-For-Your-Life and the Goosebumps Presents adaptation of "You Can't Scare Me!" 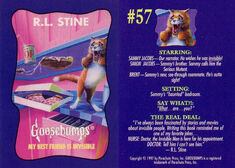 Trading card for this book found in The Curse of Camp Cold Lake.