Goosebumps Wiki
Register
Don't have an account?
Sign In
in: Goosebumps Most Wanted, Clowns, Characters,
and 15 more

Not to be confused with Murder the Clown (Jonathan Chiller) from When the Ghost Dog Howls and The Horror at Chiller House.

Marshall Choka
Murder the Clown is the stage name of Uncle Theo Gordon from the seventh Goosebumps Most Wanted book, A Nightmare on Clown Street. He is a clown performer at Koko's Klown Academy. An alternative version of the character appears in the film Goosebumps and other media related to the film.

In the seventh Goosebumps Most Wanted book, Theo Gordon tries to write a note to Ray, but was caught by Mr. Haha Face and sent to Clown Street, a prison for clowns that are tortured by the true main villain of the book, The Frightener. At the end of the book, Ray couldn't wash the clown makeup off of himself, implying Murder was not able to either.

Murder the Clown appears in the film Goosebumps portrayed by Marshall Choka, credited as "Monster #4." He is one of the villains and monsters assembled by Slappy to wreak havoc in the town. When the monsters are sucked into R.L. Stine's book, Murder briefly loses his wig before being sucked in. He doesn't speak, but does laugh a few times, with a honking noise heard throughout his screen-time. At the time, he was the newest Goosebumps character in the film. Despite being based on Uncle Theo, his appearance and personality have been radically altered from the book, with the most notable change being his alignment changing from neutral to evil.

The film version of Murder also appears as one of the many enemy monsters hunting down Twist in Goosebumps Night of Scares and Dead of Night. In the latter title, Murder carries an oversized lollipop instead of an axe (this decision was likely made to avoid including any serious violence in the game). In a small cameo, a portrait of Murder appears in the living room of Dead House in Goosebumps: The Game, and the player mentions a clown while talking to Slappy, possibly referring to him.

Another version of Murder appears in Goosebumps HorrorTown, where he is portrayed as a recent divorcee who discovers a new lease on life when he becomes a clown. Oddly, Bingo Bongo's design is nearly identical to Murder's design on the original book artwork.

In the book, Murder's face make-up is described as being a bright red, with his mouth hidden inside a thick, black scowl. His eyebrows are painted and stretch down the sides of his face, and he wears a curly golden wig that's split down the middle from a fake blood-splattered hatchet buried in the top of his head. His clothing is said to be of a ragged, long polka-dot jacket and baggy yellow pants. He also has a fake, fat brown snake around his neck instead of a clown ruffle. He always wears the clown make-up in public, due to the circus' orders.

Murder's appearance differs on the book's cover. He dawns typical clown attire, a rounded bright red nose, white mouth make-up, non-painted eyebrows that don't extend to the sides of his face, sinister green eyes, a different hair style, and no axe lodged in his head. His hair color is also depicted as gray, though this was changed to gold on the final book cover. This design of Murder is used for Bingo Bongo in Goosebumps HorrorTown.

In the film and all other media related to it, Murder wears a standard clown outfit, white face make-up, a red wig, and a round black nose.

Characters spotlighted on the covers of Goosebumps Most Wanted are typically villains. Despite this, Murder is portrayed as a neutral character in the book that enjoys the circus life and loves to crack jokes a lot. "It's murder!" is one of his catchphrases.

From the film onward, Murder is portrayed as being a maniacal evil clown, going against the book canon.

Murder the Clown as depicted on the Korean cover of A Nightmare on Clown Street. 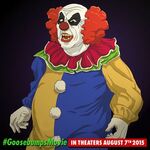 Concept art for Murder the Clown from the film Goosebumps. 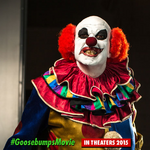 Murder the Clown with the Muglani and Prince Khor-Ru at the 2014 San Diego Comi-Con.

Murder the Clown walking with the Bog Monster, A Pumpkin Head, a Scarecrow, the Snake Lady, and some Graveyard Ghouls.

Murder's cameo as a portrait in Goosebumps: The Game.

Murder on the Goosebumps Night of Scares loading screen.

Artwork of Murder from Goosebumps HorrorTown.

Murder as seen in Goosebumps HorrorTown.

Murder as seen in 'Goosebumps Dead of Night.

Murder attacking the player in Goosebumps Night of Scares and Goosebumps Dead of Night.

Murder on the Goosebumps Dead of Night loading screen.