Mummification was a very important tradition to ancient Egyptian religion as the physical body was thought to be needed in the afterlife. The following list features the process of mummification.

A mummy featured on the cover of The Curse of the Mummy's Tomb.

A mummy seen drowning in goop on the UK cover of The Curse of the Mummy's Tomb.

Prince Khor-Ru's arm reaching out of a tomb in Return of the Mummy.

A mummy as seen on the Classic Goosebumps cover of The Curse of the Mummy's Tomb.

Prince Khor-Ru's arm reaching out of a tomb in the Classic Goosebumps edition of Return of the Mummy.

A mummy seen ringing a door bell in Who's Your Mummy?

Prince Khor-Ru in its tomb on the DVD cover of Return of the Mummy.

A close-up of a mummy's face from the television episode of Don't Wake Mummy.

Prince Khor-Ru in the television episode of Return of the Mummy.

A mummy from the Goosebumps film. 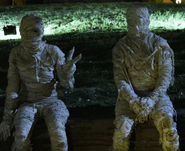 A pair of mummies from Goosebumps 2: Haunted Halloween.
Add a photo to this gallery
Retrieved from "https://goosebumps.fandom.com/wiki/Mummies?oldid=104452"
Community content is available under CC-BY-SA unless otherwise noted.