Mud Monster
Mud Monsters are monsters from Muddy Creek that appear in the fifteenth Goosebumps book, You Can't Scare Me!, and its television adaptation.

According to Muddy Creek legend, a long time ago, there were two neighboring villages: one village was poor and lived in the forest, and the other was more wealthy and well established. The city village hated the forest village and treated the villagers from the forest village poorly. One stormy night, a rainstorm caused the creek in the forest to overflow and flash flood, burying the entire forest village in a mudslide killing all the villagers. Local legend claims that once a year, the townspeople return to form covered in mud and go to find innocent victims to drag back with them into the mud.

In present day, Eddie and his friends heard about the legend, and discovered that Courtney King, a brave girl that was constantly showing them up, believes in their existence. They planned to have Eddie's brother pretend to be a mud monster and scare her. However, the Mud Monsters turned out to be real and scared the kids off.

In the television adaptation of the book, only one Mud Monster is present. It's similar in design to how it looks on the book cover, though it's build is a bit bulkier. In a difference to the book, Courtney scolds the monster for being so rude and ends up talking to the monster until the rain stops, drying out the monster and making it inactive. The press interviews Courtney for proving that Mud Monsters exists, but they leave when the rain comes back, which reawakens the monster. It then scares Eddie and Hat as the episode ends.

In addition to their appearance in You Can't Scare Me! and its accompanying television adaption, the Mud Monsters are mentioned in The Haunted Mask II when Chuck Greene tells a mud-drenched Steve Boswell that he resembles a Mud Monster. Mud Monsters also make cameo appearances inThe Knight in Screaming Armor and Welcome to the Wicked Wax Museum from the Give Yourself Goosebumps series. There's also a video game titled Mud Monsters that's mentioned in Trapped in Bat Wing Hall. In the 1997 Goosebumps 365 Scare-a-Day Calendar, Mud Monsters are suggested as a Halloween costume idea.

One of the Mud Monsters on the original cover of You Can't Scare Me! is featured as one of the monsters in the Monster Mash mini-game in the video game Goosebumps HorrorLand. The Mud Monsters also appear in Goosebumps HorrorTown with a difference design. They're larger, bulkier, have yellow eyes, a human-like mouth with teeth, and are lack lacking vines wrapped around their body.

A Mud Monster known as "The Mud Monster" was one of the mascot characters Scholastic frequently used in mass merchandising and advertising for the Goosebumps franchise in the late 90s. It's design is very similar to how the monsters look on the book cover, but with a smaller forehead and less sinister expression.

One of the Mud monster's hands as depicted on the UK cover of You Can't Scare Me!. 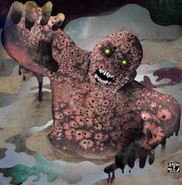 A Mud Monster as depicted on the Korean cover of You Can't Scare Me!.

A group of Mud Monsters as seen in the Korean version.
Add a photo to this gallery

They're Coming for You... t-shirt.

Shocker Locker cover in package.
Add a photo to this gallery

In-game
Add a photo to this gallery
Retrieved from "https://goosebumps.fandom.com/wiki/Mud_Monsters?oldid=153130"
Community content is available under CC-BY-SA unless otherwise noted.