Mrs. Maaargh was the headmistress at the Caring Academy, with her son Marv being one of the students and also taught a class there. She revealed herself to the other students, who were there to be educated that she was a monster and introduced them to the Food Chain, how the higher species eat the lower species, including how monsters eat humans. She put each students name on her "food chain" saying that she will eat whoever is on the bottom at the end of the term, depending on how bad they are. The students were very fearful of Mrs. Maaargh and tried very hard to impress her to avoid being at the bottom of the food chain. And none of the other staff knew that she was a monster and didn't believe the students when they tried to tell them. One of the students that Mrs. Maaargh really hated was Molly Bagby because she tried to escape once, making her intended to be Mrs. Maaargh's victim.

One day, a new student named Paul Perez, who was always getting in trouble at his old school came into Mrs. Maaargh's class and they both went off at a bad start. After she licked Paul for a taste test, she caught him staring at her doughy bare feet. Then she explained the food chain and how she is a bottom feeder and she will pig out on whoever is at the bottom after the talent show they were having, to which Paul made fun of, thinking it was a joke. Mrs Maaargh let that slide for moment since Paul was new and put him on top in place of another student named Sharon. The she told him to walk up to the chalkboard to tell the difference between subjects and verbs, resulting in him accidentally stepping on one of her feet and breaking off one of her claws. This prompted Mrs. Maaargh to move Paul down two spots. Later, Paul was returning to her classroom to apologize after telling Marv how she is ugly and weird and she inadvertently confirmed to him that she was a monster by eating one of the white mice on a cracker and offered Paul an appetizer when she caught him standing at the doorway. Then Mrs. Maaargh was in her headmistress' office when Paul came in to look for and was dismayed to know that Mrs. Maaargh was the headmistress. He told Mrs. Maaargh that she can't eat kids to which she replied that she will only eat one and had a strong feeling it was going to be Paul. She then told him to work hard and that he might surprise her, to which Mrs. Maaargh doubted that he will do so.

Later, Mrs. Maaargh held the auditions first in the talent show, then in the auditorium. She was impressed with some of the acts, but didn't move Molly up the food chain even though her music on the violin was wonderful. Then a few acts went wrong; first Brad Caperton's violin went off with the smell of skunk sent, which Mrs. Maaargh confirmed by taking a sip out of its bottle and then Paul's balloons were punctured with holes. Paul was put at the bottom of the food chain underneath Brad for this, which Mrs. Maaargh was most delighted of. Later Paul attempted to impress her with a science project that he was doing for extra credit, but was dashed due to the project being replaced by a reading saying YOU UGLY. At that, Mrs. Maaargh told Paul that he is practically on the floor, not even on her chart, upsetting him.

The next day, Mrs. Maaargh called Paul's parents in just as he was attempting to escape. When he came back in, Mrs Maaargh told his parents that Paul was having problems and that was why he was running away. She asked Mr. and Mrs. Perez if they wanted to take their son home to which they refused because they wanted their son to stick it out and to adjust. Paul tried desperately to tell his parents that Mrs. Maaargh was a monster, but they didn't believe him, especially when he pointed out her huge feet to them. Mrs Maaargh then told Paul's parents that it is dangerous to run away because of some dangerous woods and that Paul would be lost forever in those woods if he tried to run away again. This made Paul realize that Mrs. Maaargh was paving the way for him to disappear. Then Mrs. Maaargh told Paul that he will be the first to perform on the Talent Show.

The next morning, Mrs. Maaargh sent Paul a note telling him to come to the auditorium to act his act ready. Paul did so, not realizing that the talent show was canceled and that Mrs. Maaargh had set a trap for him. Mrs. Maaargh ambushed Paul and dragged him to a trapdoor leading to a furnace where she planned to cook him. Paul told Mrs. Maaargh that she will be very sorry and that she will be caught and killed, to which Mrs. Maaargh replied that it is why she is careful. She led Paul down a tunnel to the furnace when Paul grabbed its door, pulled out of her grasp and belt her with a shovel. Mrs. Maaargh then chased Paul down the tunnel to the elevator. Mrs. Maaargh was hunting for Paul when Marv came in and told Paul to make her laugh as she will hibernate for months if she laughed really hard. Paul then managed to make Mrs. Maaargh laugh by tickling her feet, therefore putting her into hibernation.

Mrs. Maaargh eventually got out of her hibernation. Some time later, she discovered Winner Island where losers become winners. She became a counselor there and did her old antics from the Caring Academy, including her food chain, which was now a Wait Watchers Chart and this time it depended on who the loser was to be eaten. The campers and the director, Uncle Felix were very fearful of her and the campers had to compete really hard to avoid being on the menu. To make matters worse, there were some rules of not trusting anyone or anything or else they will be tricked.

One day, a boy named Tommy Farrelly was sent to Winner Island by his parents to make him a winner. Mrs. Maaargh met Tommy when he came to see after being told by other campers of her being a monster. Tommy thought it was all a joke and he pulled at Mrs Maaargh's face thinking it was a mask. After a disbelieving Tommy let go of her face, she told him that he made a bad start with her and asked him if he believed in monsters. She then dared Tommy to pick her nose, to which he strongly refused to do after a hesitant moment. Later, Mrs Maaargh introduced Tommy in her class and explained about her Wait Watchers Chart to him and the other campers. Tommy was at the bottom, with another camper named Sophie next-to-last right above him and Mrs. Maaargh told Sophie that she was seen helping Tommy and helping others is not allowed. Mrs. Maaargh then explained that she will give the campers several tests for her Final Exam to see who at the camp is tough. Then she began the Exam by starting an "Earth science experiment" to see who can eat some worms that were collected. Tommy ate one of them and Mrs. Maaargh told him that he had to have the courage not to eat an innocent earthworm and he failed the test. Tommy was upset and pointed out that Mrs. Maaargh was eating a white rat while he wasn't allowed to eat the worm, to which she replied that she is a monster.

The next morning, Tommy attempted to make Mrs. Maaargh change her mind about him by giving her a bouquet of wildflowers that another Ricardo told him to give to her. But Tommy didn't know that Ricardo knew that Mrs. Maaargh was allergic to wildflowers, which was a big disaster for Tommy. Later, she sent a counselor named Bert to fetch Tommy to play a game of mud tag and it was a short match. Later on, Mrs. Maaargh announced Bat Run Night, another part of the Final Exam where the campers have to show courage when the bats come swooping at them. Tommy failed this test too, making Mrs. Maaargh certain that he will be her victim. The next day Mrs. Maaargh made some campers, including Tommy to swim through some hazardous caves to find their way through the darkness. Tommy messed up again and at dinner, she told him not to fall in quicksand pit tomorrow as the gritty sand gets stuck in her teeth.

The next morning, Mrs. Maaargh announced her last test for her Final Exam, which was a long walk to the other side of the island then a step climb up a sloping hill that led to the High Cliffs. Mrs. Maaargh was excited that she would finally have her feast after this. Of course, Tommy once again messed up when the eighth rung broke and Mrs Maaargh told to think himself as a loser but a good meal. After that, Tommy was brought into Mrs. Maaargh's dining room and put onto her platter. Mrs. Maaargh was almost about to finish Tommy off, but Tommy managed to subdue her by covering himself in a hot sauce that he hated. Mrs Maaargh had very sensitive taste buds and the hot sauce really and she became really hysterical and started swimming frantically away from Winner Island.

Mrs. Maaargh is a big fat creature with watery brown eyes, hair the color of mud, swollen gums, and four rows of teeth. She has the most hideous feet on Earth as they are big and doughy with huge black claws. Because of their size, Mrs. Maaargh is unable to wear shoes.

Mrs. Maaargh is a really vile creature who takes a liking to human appetizers. She is very smart and cunning and is always careful not to reveal her secret to any of the adults as they will hunt her down and kill her if they did find out. She can be very hard to please at times, making it difficult for others who are trying to impress her and she really doesn't like it when anyone made fun of her. She does like it when people give her good comments, but being a sadistic monster, Mrs. Maaargh has a tendency to be unfair. Mrs. Maaargh really likes to know that someone is at the bottom of her food chain as it means she will be having her feast, unless her victim manages to put her into hibernation by tickling her or giving her hot sauce. 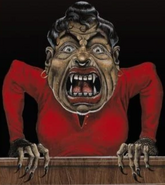 Mrs. Maaargh as depicted on the French cover of Creature Teacher.
Add a photo to this gallery

Retrieved from "https://goosebumps.fandom.com/wiki/Mrs._Maaargh?oldid=121972"
Community content is available under CC-BY-SA unless otherwise noted.