In the third Goosebumps Series 2000 book, Mrs. Maaargh is the headmistress at the Caring Academy, with her son Marv being one of the students and also taught a class there. She reveals herself to the other students, who were there to be educated that she was a monster and introduced them to the Food Chain, how the higher species eat the lower species, including how monsters eat humans. She put each students name on her "food chain" saying that she will eat whoever is on the bottom at the end of the term, depending on how bad they are.

The students were very fearful of Mrs. Maaargh and tried very hard to impress her to avoid being at the bottom of the food chain. And none of the other staff knew that she was a monster and didn't believe the students when they tried to tell them. One of the students that Mrs. Maaargh really hated was Molly Bagby because she tried to escape once, making her intended to be Mrs. Maaargh's victim.

Later she sets her sights on a new student named Paul Perez to become her next victim. At the end of the story she sets up a trap in order to eat him. However, Marv reveals to Paul that extreme laughter is her weakness, which will cause her to hibernate. Paul then managed to make Mrs. Maaargh laugh by tickling her feet, therefore putting her into hibernation.

Being released 16 years after the first book, the sixth Goosebumps Most Wanted book shows that Mrs. Maaargh eventually got out of her hibernation. Some time later, she discovered Winner Island where losers become winners. She became a counselor there and did her old antics from the Caring Academy, including her food chain, which was now a Wait Watchers Chart and this time it depended on who the loser was to be eaten. The campers and the director, Uncle Felix were very fearful of her and the campers had to compete really hard to avoid being on the menu. To make matters worse, there were some rules of not trusting anyone or anything or else they will be tricked.

A boy named Tommy Farrelly was sent to Winner Island by his parents to make him a winner. Mrs. Maaargh meets Tommy when he came to see her after being told by other campers of her being a monster. Tommy thought it was all a joke and he pulled at Mrs Maaargh's face thinking it was a mask, but he quickly discovers she is indeed a real monster. Later at class, Mrs. Maaargh explains that she will give the campers several tests for her Final Exam to see who at the camp is tough.

On the last day, Mrs. Maaargh announces her last test for her Final Exam, which was a long walk to the other side of the island then a step climb up a sloping hill that led to the High Cliffs. Mrs. Maaargh was excited that she would finally have her feast after this. Tommy once again messes up and Mrs. Maaargh brings him to the dining room and put onto her platter. Before she could devour him, Tommy manages to subdue her by covering himself in a hot sauce that she hated. Due to Mrs Maaargh's sensitive taste buds, she became really hysterical and started swimming frantically away from Winner Island.

Outside of the Creature Teacher saga, Mrs. Maaargh has appeared a in few other Goosebumps media, such as being mentioned in the Goosebumps movie book, Slappy's Revenge. She also appears as a character in Goosebumps HorrorTown, with her monster form resembling how she appears on the book covers. However, her canon is altered. She is given the first name of "Agatha", is said to have grand children, and acts as a love interest to Mr. Mortman from The Girl Who Cried Monster.

Mrs. Maaargh is a big fat creature with watery brown eyes, hair the color of mud, swollen gums, and four rows of teeth. She has the most hideous feet on Earth as they are big and doughy with huge black claws. Because of their size, Mrs. Maaargh is unable to wear shoes.

Mrs. Maaargh is a really vile creature who takes a liking to human appetizers. She is very smart and cunning and is always careful not to reveal her secret to any of the adults as they will hunt her down and kill her if they did find out. She can be very hard to please at times, making it difficult for others who are trying to impress her and she really doesn't like it when anyone made fun of her. She does like it when people give her good comments, but being a sadistic monster, Mrs. Maaargh has a tendency to be unfair. Mrs. Maaargh really likes to know that someone is at the bottom of her food chain as it means she will be having her feast, unless her victim manages to put her into hibernation by tickling her or giving her hot sauce. 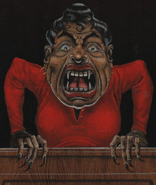 Mrs. Maaargh as depicted on the French cover of Creature Teacher.

Mrs. Maaargh as depicted on the Spanish cover of Creature Teacher.