Reddish-orange
Mr. Wood is the main antagonist of the seventh Goosebumps book, Night of the Living Dummy. Mr. Wood is a sentient ventriloquist dummy who comes to life when the words "Karru Marri Odonna Loma Molonu Karrano" are read aloud. The words translate to "You and I are one now."

When Lindy Powell comes and finds a ventriloquist dummy in a dumpster, her sister Kris, gets jealous of her. Soon Kris gets a dummy of her own and she names him Mr. Wood. Strange things start happening and Kris is blamed for all of it. Later, she finds out that it was Lindy all along and gets very upset at her. Kris finally gets a show, when she finds Mr. Wood's card with the spell on it (Karru Marri Odonna Loma Molonu Karrano). During the show, Mr. Wood comes to life and sprays everyone with disgusting green slime and also insults Mrs. Berman (the music teacher). Kris and Lindy soon see the dummy moving on his own. After seeing it, they try to kill him by burying him and trying to cut his head off. He is finally killed when he is run over by a steamroller, crushing him to powder after a chase in the rain. When they go back into their home, they find that Slappy is alive as well. His last words in the book (spoken with a throaty growl) are, "Hey, slave - is that other guy gone? I thought he'd never leave!"

I Am Slappy's Evil Twin

After not appearing in a book in over 24 years, Mr. Wood finally made another appearance in the third Goosebumps SlappyWorld book, I Am Slappy's Evil Twin. In it, it is revealed that the original owner and creator of Mr. Wood was Franz Mahar, a ventriloquist. Mahar later became friends with a magician named Kanduu. One day, Mahar was about to perform on stage with his dummy, Mr. Wood. When Mahar opened the case that contained the dummy, Mr. Wood jumped out punched him in the chin. "Keep your hands off me!" Mr. Wood said after the attack. That's when Mahar realized Kanduu was using his magic for evil. Mahar left Mr. Wood in the case, and abandoned him, fleeing the country to escape from the evil dummy.

Mr. Wood appears on the Enter HorrorLand website as a playable character. You can fight Slappy as him, which is possibly a reference to Night of the Living Dummy.

Mr. Wood makes an appearance with Slappy in the last part of the game. In the game, he has a different look. He looks like Slappy, with the black suit, with shirt, and short hair (instead of a shirt, jeans, necklace and messy hair), but with blue eyes, orange hair and a blue bow tie. Although he appears, he doesn't move or talk while the player is talking with Slappy. In the end, after the credits, the player can see Mr. Wood move his head with his mouth open, staring at the player.

In Night of the Living Dummy, Mr. Wood has bright red hair. He wears a red-and-green flannel shirt with blue denim jeans. And instead of the formal-looking brown shoes that Slappy has, Mr. Wood wore white high-top sneakers.

In the graphic novel adaptation, he has orange hair and blue eyes like Slappy. He wore a V-neck sweater and dark gray pants, and wore blue sneakers.

In Goosebumps: The Game, Mr. Wood's appearance is pretty much like Slappy's, such as the suit but with a blue tie instead of a red tie.

As the first evil living dummy, Mr. Wood uses similar jokes that Slappy uses later on in the series. He gets Kris in trouble by insulting the Powell's neighbors and by ruining Kris' show at school and almost getting her expelled. His personality is likely very similar, if not interchangeable, to Slappy's.

Mr. Wood as depicted on the UK cover of Night of the Living Dummy. 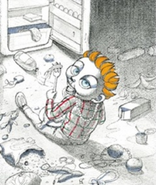 Mr. Wood as depicted on the Korean cover of Night of the Living Dummy. 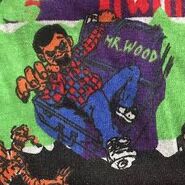 Mr. Wood as depicted on the original version of It's Alive Topps trading card.

Mr. Wood as depicted on the final version of It's Alive Topps trading card.

Mr. Wood as a playable character in Enter Horrorland 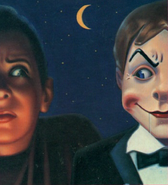 Mr. Wood as depicted on French cover of Night of the Living Dummy.