Mr. Saur is described as being "sort of a legend at Pitts Landing Middle School." His incredibly strict grading policy makes him infamous among students. His sour demeanor has earned him the nickname "Sourball."

Saur is a skeptic, and he attempts to fail Greg Banks for giving a presentation on a supposedly cursed camera. Greg has to go to great lengths to procure the camera and bring it to class, all so he can get a passing grade.

In both the book and the television adaptation, Mr. Saur is still skeptical when Greg presents the camera in class. However, the two diverge in endings. In the book, Mr. Saur takes a photo of the whole class, and Greg is left waiting to see the result. In the episode, a photo is accidentally taken of Mr. Saur, and it shows him bald. At first he believes it to be some sort of trick photograph. Suddenly, his hair begins to fall out. As Greg and his fellow classmates laugh, Mr. Saur panics, screaming "it's not a trick!"

Greg describes Mr. Saur as a strict teacher who never laughs. Because of this, his students usually call him "Sour Ball". He is also known to be quite insulting to his students, at one point taking great pleasure in mocking Greg's rapid weight gain.

In the book, Greg describes Mr. Saur as bald, bony, and very skinny. Greg also noted that Mr. Saur wore a yellow alligator shirt. In the television episode, Mr. Saur is a heavy-set man with dark hair and a mustache. He wears glasses and a dark gray suit with a bow-tie. 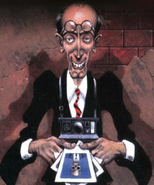 Mr. Saur as depicted on the French cover of Say Cheese and Die — Again!.