Eugene Lipinski
Mr. Mortman is the main antagonist of the eighth Goosebumps book, The Girl Who Cried Monster, and its television adaptation.

Mr. Mortman is the Timberland Falls librarian. At the library, Mr. Mortman leads a reading program called the Reading Rangers. Mr. Mortman tries to encourage Lucy Dark to read more classic literature, but the only book she's interested in is monster books like Mary Shelley's Frankenstein. She asks whether White Fang is about a monster and she also asks if Anne of Green Gables has any monsters in it.

One rainy summer evening, Lucy leaves the library and realizes she forgot her roller blades. She goes back to the library after it has closed. While hiding, she sees Mr. Mortman reaching into his desk to procure some flies to feed to his pet turtles, which he keeps in a metal pan on his desk at all times. Lucy sees Mr. Mortman's head swell up, his eyes bulge out, and his mouth turn into a gaping black maw. Lucy leaves in a hurry and forgets her roller blades again and so she heads back to get her roller blades, but then the door is locked.

One week later, she returns to the library and after Mr. Mortman gives her a new book for the reading club, she hides in the stacks to catch Mr. Mortman in the act. After he escorts everyone out of the building, Mr. Mortman locks the door. Lucy says to herself, "This is boring." Then Mr. Mortman turns into a monster again! Then he eats some flies again. Then he picks up a turtle, chews up the shell, and swallows it. Lucy barely made it out of the library.

Later on, Mr. Mortman kindly returns Lucy's bookbag, which she had left in the library. He asks if she had stayed behind after he closed up, but she says no. He bids her farewell, as her mother pulls up in the driveway.

Lucy and her friend, Aaron, tail Mr. Mortman from the library to his house. Lucy peeks through the living room window just in time to see Mr. Mortman indulge in a series of grotesque meals. First, he takes a big handful of fish from his aquarium and shoves them into his mouth. Then, Mr. Mortman chews up an entire snail, shell, and all. Following that, he slurps up an entire eel like a spaghetti strand. Lucy tries to get Aaron to come peek in the window, but he is off looking for a ladder to see into Mr. Mortman's house better. Lucy loses her balance and falls from the window. Aaron runs away from the house as Mr. Mortman exits the house and picks her up off the ground. Lucy makes up a story about how she was just there to tell him she would not be at the Reading Rangers meeting the next day. He offers to let her inside so she can call her parents for a ride home, but she does not want to go inside.

Forced to attend her meeting with Mr. Mortman upon her parents not letting her quit the Reading Rangers, Lucy braves the rain and returns to the library. Before he starts the meeting, Mr. Mortman gets up and locks the door. He tells her he can't let her leave. He starts to make his move towards her when she leaps up and attempts to escape. It seems dire but then she comes up with the bright idea of tearing out a drawer of the card catalog, spilling the contents on the ground. Mr. Mortman, though still a monster, is also a librarian and he stops his pursuit of Lucy to organize the cards. Lucy runs out into freedom. She also runs out into Aaron who had been hiding in the library. Turns out he saw Mr. Mortman turn into a monster and is willing to tell her parents.

Lucy and Aaron tell Lucy's parents about Mr. Mortman and they respond with, "Well, I guess we have to invite him to dinner." A few nights later, Mr. Mortman shows up for dinner. The family makes polite small talk with the librarian who eventually inquires as to what is for dinner and asks the father to repeat himself. The father says "You are!" again and he starts getting scared. Then Lucy's parents, who are monsters themselves, eat Mr. Mortman alive as their children cheer with joy.

Differences in other media

Minor changes were made to Mr. Mortman in the television adaptation of The Girl Who Cried Monster. Rather than eating baby turtles, he instead eats bugs. He is still eaten by Mr. and Mrs. Dark, but they also mention that Mr. Mortman is the first monster to come into their town in 20 years besides them where they don't want their children to tell anybody else.

Mr. Morton received more drastic changes to his character in Goosebumps HorrorTown. His full name is revealed to be Eugene Mortmon, which is likely a homage to Eugene Lipinski, the actor who played Mr. Mortman in the television series. In terms of personality, he is portrayed as being grumpier, but he is also just a person who simply wants peace, despite being a monster. And unlike the book and TV episode, Mrs. Dark does not eat him when she discovers his secret of being a monster. She initially wanted to get rid of him but they reached an agreement, as they ultimately both just want to be kept alone. From then on, Mr. Mortman generally keeps to himself and even has formed a relationship with Mrs. Maaargh from Creature Teacher. While he is still a librarian that is secretly a monster, this interpretation of the character is entirely non-canon due to the alterations made to his story. 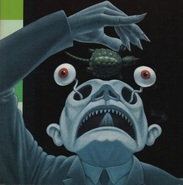 Mr. Mortman in his monster form as depicted on the French cover of The Girl Who Cried Monster. 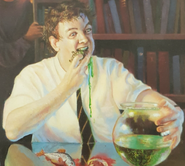 Mr. Mortman in his human form as depicted on the Dutch cover of The Girl Who Cried Monster.

Mr. Mortman in his human form as he appeared in the TV adaptation.

Mr. Mortman in his monster form as he appeared in the TV adaptation. 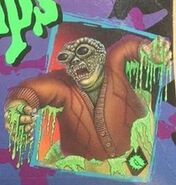 Mr. Mortman as depicted on the Monster Bag packaging.