Mr. Fleshman is Jack Archer's neighbor. Jack constantly spies on Mr. Fleshman. One day, Jack thinks he sees a monster in his neighbor's house, so he sneaks in. Out of nowhere, a ghost accumulates. Once again, Jack is confronted by Mr. Fleshman. Mr. Fleshman says that the strange things in his house are special effects for movies.

Jack overhears Mr. Fleshman talking to someone with a communication device. Jack assumes that Mr. Fleshman is a government agent. Jack confronts his neighbor about this, and Mr. Fleshman says that he works for the Alien Detection Bureau.

A complete alien invasion befalls Jack's neighborhood; almost everyone except him is possessed by aliens. When Jack is surrounded by a group of aliens, Mr. Fleshman shows up, and Jack assumes that he has come to help defeat the aliens. However, Mr. Fleshman says that he isn't a government agent, he is the alien leader. Mr. Fleshman tears off his mask and reveals his real face. Mr. Fleshman looks like a giant brain; he is pink and slimy. Mr. Fleshman hugs Jack, but Jack manages to enter into Mr. Fleshman's brain. Once Jack has possessed Mr. Fleshman, he falls down. Jack leaves Mr. Fleshman's body, and he realizes that entering the alien's brain killed it.

The crowd of people that were marching towards Jack gradually become slower and slower. They all begin falling down. Mr. Fleshman had been the aliens' power source, but now that Mr. Fleshman was gone, the other aliens couldn't function. All of the people in the crowd slowly begin waking up.

Mr. Fleshman initially becomes upset with Jack whenever he catches the boy spying on him. But when Jack sneaks into his house, he starts acting nicer to Jack to let his guard down. In reality, he is actually evil and the one orchestrating the plot of the body squeezer invasion.

Mr. Fleshman, in his human form, has grayish-green eyes and gray hair. In his true form, Mr. Fleshman looks like a giant brain; he is pink and slimy. However, in Goosebumps HorrorTown his real form is more of a large tentacle monster with one large blue eye. 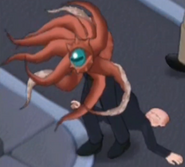