More Tales to Give You Goosebumps

The cover illustration depicts Curly the Skeleton telling stories to a group of skeleton campers around a campfire on the edge of a cliff.

READER BEWARE -- YOU'RE IN FOR TEN SUMMERTIME SCARES!

Is Matt's summer camp being taken over by an evil patch of poison ivy? Will Eric escape from his tank, now that he's been turned into a fish? Can Tara help the terrified voice she hears inside a beautiful seashell? Find out in these ten creepy Goosebumps short stories perfect for reading around the campfire or under the covers!

French (Compilation of Strangers in the Woods, Shell Shocker, P.S. Don't Write Back and For the Birds) (Volume 1)

Dutch
Add a photo to this gallery

Scarezine Newsletter #1
Add a photo to this gallery 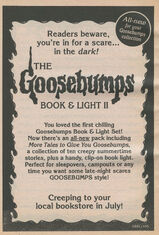 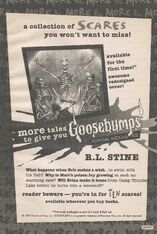 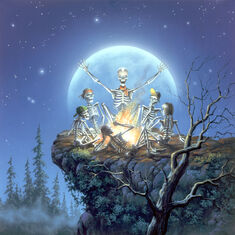 Retrieved from "https://goosebumps.fandom.com/wiki/More_Tales_to_Give_You_Goosebumps?oldid=151303"
Community content is available under CC-BY-SA unless otherwise noted.