Goosebumps Wiki
Register
Don't have an account?
Sign In
Advertisement
in: Books, More & More & More Tales to Give You Goosebumps, Books Released In 1997,
and 6 more

The cover illustration depicts Curly the Skeleton snowboarding down a hill as Drool the Bulldog rides a sled.

READER BEWARE -- YOU'RE IN FOR TEN HOLIDAY SCARES!

Will Brad learn to care for his pet Gronk, before it takes care of him? Can Samantha sit through a boring Nutcracker ballet without cracking up... for real? Are Max's new monster skates putting him on thin ice? Has Sam been caught in the bone-chilling grip of an ice vampire? Find out in these ten creepy Goosebumps short stories guaranteed to fill you with holiday fear!

The following stories are all Christmas-themed:

The story "Why I Hate Jack Frost" was ghostwritten by Kathryn Lance, an author who ghostwrote two books in the Ghosts of Fear Street series — and claims to have written seven Give Yourself Goosebumps books. In a blog post, she detailed doing research on Jack Frost in order to get a feel for how to write the character.

It is currently unknown if any other stories in More & More & More Tales to Give You Goosebumps were ghostwritten.

In France in 1998, three stories from various Tales to Give You Goosebumps books were released as separate books that also came with an audio cassette of the story. Two stories from this edition were adapted, "Don't Sit on the Gronk" and "Why I Hate Jack Frost".

"Why I Hate Jack Frost"

"Don't Sit on the Gronk" 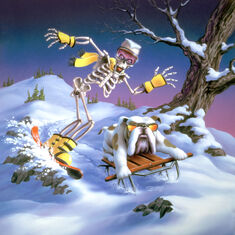