This blood is bad to the bone!

IT'S FOUR TIMES AS EVIL!

Evan Ross can't forget about Monster Blood—the evil green slime that never stops growing. It can turn ordinary pets into ferocious animals and twelve-year-old kids into freakish giants. But now there's a new kind of Monster Blood in town. It comes in a can just like the others. Only difference is this slime is blue instead of green. And instead of just growing, it's multiplying—into terrifying blue creatures with razor-sharp teeth...

Evan Ross is staying with his cousin, Kermit Majors, while his parents are away in Tucson, Arizona. After arriving at Kermit's house, Evan has another run-in with Conan Barber, a bully from Evan's school. Kermit boldly confronts the bully, which prompts Conan to pull the right sleeve of Evan's new sweater and stretch it. Later, Kermit tells his mother that Evan picked a fight with Conan, which gets Evan scolded.

Kermit blindfolds Evan and takes him into the basement, which Kermit has made his own personal laboratory. Kermit puts Evan's hand into a jar of tarantulas as part of a scientific test. Kermit says that the tarantula won't bite as long as Evan remains calm. Suddenly, Andy appears at the basement entrance, saying that she has more Monster Blood. Not realizing that this is a joke, Evan panics, and the tarantula bites him. Upset, Evan demands that he and Kermit have a water-gun fight. When the boys begin playing with water outside, they are interrupted by Conan. Conan doesn't seem to be too upset, but Kermit fires Evan's water-gun, splashing Conan.

Conan almost begins beating Evan up, but he is stopped by Andy. Once Conan leaves, Kermit takes out his lab mice. Because he's installed an invisible electric fence, Kermit is convinced that the mice won't escape. Evan suspects that the mice are escaping, and Kermit realizes that the fence isn't on. Kermit turns on the fence, and it electrocutes Evan. When Conan approaches, he is also electrocuted. Furious, Conan grabs and pulls Evan's ear. During dinner that night, Kermit tells his mother that Evan tried to fight Conan again and lost all of the expensive lab mice. Later, Evan vows to teach Conan a lesson, and Kermit offers to help Evan. Kermit says that he will use his hair-growth formula on Conan.

Late that night, Evan is awoken by Andy, who has stopped by with a blue can. She says that it is filled with Monster Blood. Kermit, who is also awake, grabs the can and opens it. The boys see blue Monster Blood in the can, but Andy quickly closes it. Conan steps outside and asks the kids what's in the can. Kermit tells him that it is delicious candy. Conan approaches, but he is electrocuted by the electric fence. Conan leaves, but Kermit accidentally tilts the can, causing some of the blue Monster Blood to fall out. The substance forms into a blob-like creature with eyes.

The creature races over to the garden hose, and it drinks until it bursts into two creatures. Kermit attempts to trap the creatures by luring towards a puddle of water, but they get to the water and multiply into four — seemingly angrier — creatures. Eventually, Evan catches the creatures in a garbage bag. Kermit's mother comes outside and sends the kids back to bed.

The next morning, Evan wakes Kermit. Evan reminds him that they have to take care of the blobs. Kermit says that he's hidden the blobs in the house's unused bathroom. Kermit also remembers that he hid his hair-growth formula there. The two boys open the bathroom door and many hairy blobs in there, all of which look fierce. Kermit remembers his electric fence, and he suggests that they shock the creatures to death with it. He and Evan herd the blobs outside, and Andy stops by. Unfortunately, Kermit forgot to turn the fence on again, and the blobs begin escaping. Conan comes over and orders that the other kids get their "balloons" out of his yard. The creatures climb onto Conan and cover him in slime. Disgusted, Conan goes back inside. Kermit's mother appears, and the three kids try to tell her what has happened, but she is too busy to listen.

While his aunt is distracted, Evan suggests that they take some of his aunt's hot sauce and feed it to the blobs. The kids try to feed the blobs some of the sauce, but Dogface, Kermit's dog, eats some. The blobs end up being unfazed by the sauce, and two blobs jump onto Dogface. This starts a chase throughout the neighborhood, which leads to a playground. Kermit and the others managed to get the two blobs off of Dogface. All of the blobs gather together and begin to pile on top of Kermit, Andy, and Evan, which begins to smother them. However, the blobs begin attacking and eating each other. Eventually, no blobs remain.

Evan and the others walk back to Kermit's house. Kermit's mom appears at the door and demands to know where her pot of hot sauce has gone. Kermit tells her that Evan ate it and loved it, which doesn't get Evan into trouble, as she is glad he enjoys her cooking. Suddenly, a strange man in a white work suit appears. and reveals that he is looking for the blue creatures. The man addresses himself as Professor Eric Crane, and he explains that the blobs were supposed to be useful for the military's underwater combat. Upset that his creations have destroyed themselves, the man begins to leave. He is tackled by Dogface, and he spills some of the blue substance onto Conan's yard. The kids agree not to tell Conan about the spill. They want Conan to have to deal with the creatures, and assume that the monsters will just tear themselves apart again.

Later that day, Evan, Kermit, and Andy are called over by Conan. He says that he found some of the "candy" that they had been trying to hide earlier, and he ate some of it. While it tasted good, he now can't seem to stop drinking water. Conan leads the kids behind his house, and they find three more clones of Conan! The Conans — looking especially mean — begin to circle Evan, Kermit, and Andy. 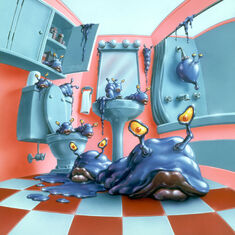 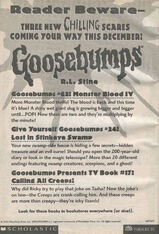 Book advertisement from I Live in Your Basement!. 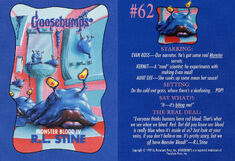 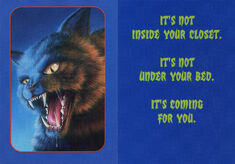