Evan's growing up way too fast!

It Came from Beneath the Sink!
Monster Blood III is the twenty-ninth book in the original Goosebumps book series, and the third book in the Monster Blood saga. It was first published in 1995.

The cover illustration depicts Evan Ross' giant legs on a playground with spilled Monster Blood nearby. A swing set partially crushed by Evan with a slide about to suffer a similar fate.

IT'S THE SLIME THAT NEVER DIES!

Evan can't stand baby-sitting his genius cousin, Kermit. Kermit refuses to play video games. He won't even play Frisbee! All he likes to do is hang out in the basement doing strange experiments and playing mean practical jokes on Evan and his friend Andy. But now Andy's found something that will teach Kermit a lesson once and for all. It's green. It's slimy. And it comes in a can marked... Monster Blood!

Evan has started babysitting his younger cousin, Kermit Majors because Aunt Dee can't afford to hire a real sitter. Kermit is a young genius who likes to play cruel jokes on Evan using his experiments. On his way to Kermit's house, he runs into Conan Barber, who he angers easily. Kermit overhears them and comes out to help Evan. He brings out an invisibility potion, which he pours on Conan. It shrinks his muscle shirt, which causes Conan to beat Evan up. Kermit tells Dee that Evan had picked a fight with Conan.

Later during lunch, Evan is telling Andy about his troubles, and she suggests using Monster Blood to get back at him. Evan refuses to ever touch it again, and has her promise to never bring out the can her parents got her from Europe. He also makes her come with him to babysit Kermit. Despite his pranks, he gets on Andy's good side by shrinking her mosquito bite with a formula he created and finishing her homework for her.

He's trying to cure his dog's hiccups but the formula he gives him only makes the dog act like a hyperactive puppy. The dog makes a big mess which Kermit later blames on Evan. Aunt Dee is upset at Evan and only gives him one more chance. Two days later, Andy discovers that Kermit got every question on her homework wrong on purpose. She wants to get back at him with the Monster Blood but Evan still refuses to touch it ever again.

While babysitting Kermit later that day, he gives them orange soda which turns out to be a formula that causes them to laugh a lot. This gets them in trouble with Conan, who beats up Evan and puts Andy in a nearby tree. Evan changes his mind and now wants to use the Monster Blood. They plan to put some of it in one of Kermit's experiments so that it will explode on him. They do and the experiment becomes a quivering blob that starts to get bigger. It explodes just as Evan is starting to eat a chocolate bar, and a piece of the Monster Blood lands in his mouth.

He starts to grow, but is barely able to get out of the basement; luckily his clothes also got Monster Blood on them, letting them grow with him. Evan spots Conan terrorizing some girls, and gets revenge by breaking his bat and putting him up a tree. They go to the playground where Evan's height helps him play baseball with the kids. Their fun is interrupted by Conan, who shows up along with some firefighters and policemen. Evan tries to explain who he is but his voice is too loud and they think he's dangerous. Evan escapes and hides behind a stack of lumber.

Andy and Kermit show up and seeing Andy scratch her arms reminds Evan of the shrinking mixture from earlier, which he thinks will turn him back to normal. He doesn't have much left, so he has to make some more of it while Evan waits outside. He makes some, but it just turns Evan blue. He makes some more, but it covers his body in feathers. They try one more time, and this works, just as two officers arrive to ask about the giant.

That night, Evan gets up to get a glass of water when he notices that he has gotten smaller. The shrinking mixture worked too well. Trigger comes in and puts Evan in his mouth, then takes him to his parent's room. Evan tells them he has a little problem. 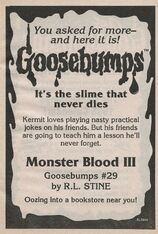 Book advertisement from The Cuckoo Clock of Doom. 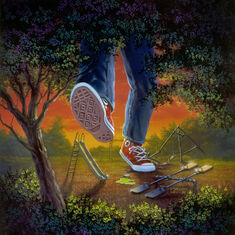 References in Other Goosebumps Media