The cover illustration shows Cuddles the Hamster breaking through his cage with Monster Blood dripping down from a drawer.

Evan Ross can't stop thinking about Monster Blood and what happened last summer. It was so horrible. So terrifying. Too bad Evan's science teacher doesn't believe him. Now he's stuck cleaning out the hamster's cage as punishment for making up stories. Then Evan's friend Andy comes to town, and things go from bad to worse. Because Andy's got a present for Evan. It's green and slimy and it's starting to grow...

Evan Ross is playing with his dog, Trigger, in his house's backyard. Suddenly, Trigger begins to increase in size. The dog grabs Evan using its mouth and picks the boy up. However, it is revealed that this nothing but a daydream. Evan's teacher, Mr. Murphy, punishes him for daydreaming and forces him to clean the cage of the class hamster, Cuddles, after school. In the hallway, Evan is tripped by the school bully, Conan Barber. Conan helps Evan up, and he claims he'll let Evan punch him in retaliation; this draws a crowd of kids. Evan punches Conan but only hurts himself, making Conan and the surrounding kids laugh, but he is observed by Mr. Murphy. Conan pretends Evan hurt him. The teacher reprimands him for hitting Conan and sends Evan to clean Cuddles' cage.

Later, while he is walking home, Evan runs into Andy. She reveals that her parents have gone abroad for a year, so she will be staying with her aunt, who lives near Evan. Andy also reveals that she has brought a gift with her: the old can of Monster Blood. Although they both initially suspect the can was empty since the Monster Blood vanished, the can is actually half full, revealing there must have been a speck left over in the can from their previous adventure. They decide to bury the can in the forest. When he arrives at home, Evan finds his father making a large metal sculpture. Mr. Ross shows his son his new creation: a giant aluminum cylinder called "The Wheel." The sculpture has been accepted into an art contest that will be held at the school, and Mr. Ross will take it there within the next several days.

The following day after school, Evan asks Andy for help getting revenge on Mr. Murphy. Andy offers an idea: dig up the can of Monster Blood and give some to Cuddles, which will cause the creature to increase in size. When the kids go to the forest to dig out the can, they discover that it is gone. The next morning at school, Evan accuses Conan of stealing from them. Conan acts innocent and sarcastically says that he will help Evan search for it. Conan then shoves Evan into a locker. Later, Evan and Andy decide to break into Conan's house to recover the can while Conan and his parents are away from home. While outside of his house, the kids realize that Trigger has followed them. Evan and Andy decide to leave Trigger outside while they enter Conan's room through a window. They discover that the Monster Blood can has been placed near Conan's trophies. Quickly, the kids take the can and run away from the house, taking Trigger with them, just as Conan and his parents return home.

Evan begins to doubt if he really wants to feed Monster Blood to Cuddles, fearing the hamster will grow too large if they do. Evan makes Andy promise not to use the Monster Blood, and she reluctantly agrees. Evan gets sick the next morning and skips school. When he returns to school the following day, Evan discovers that Cuddles has grown to the size of a rabbit. Mr. Murphy blames Evan, believing that he overfed the hamster. However, Evan knows Andy fed Cuddles Monster Blood.

The next morning, Evan arrives at school early to see Cuddles. Evan learns that the hamster has increased even more in size, and the creature is breaking out of his cage! Evan searches the school's supply closet, and he finds a leash. Since Cuddles is roughly the size of a dog, Evan ties the leash around Cuddles and attaches the leash to Mr. Murphy's desk. After school, Evan runs into Andy and accuses her of betraying her former promise. Andy admits that she fed Monster Blood to Cuddles. She apologizes and expresses regret for her decision, though she enthusiastically reports that Mr. Murphy has changed his mind about Cuddles and is thinking of trying to get the hamster on TV. The next morning, Evan and Andy arrive early at school. They arrive just in time to see a ten-foot-tall Cuddles tearing apart the classroom while the students cower away in the hall. Mr. Murphy appears and tries to stop Cuddles using a chair, which the hamster easily destroys. Thinking quickly, Evan recalls the sculpture that his father had brought to the school, and he remembers that it resembles a giant hamster wheel.

Evan and Andy run to the school's auditorium retrieve the sculpture, and they bring it back to the classroom. Unfortunately, Cuddles destroys it. Conan enters the classroom and is caught by Cuddles. As the creature plays with Conan like a toy, Evan formulates a new idea: he will go to his locker, retrieve the Monster Blood, and eat some; once he does this, he will grow in size and will eventually be able to lock Cuddles in a supply closet. Evan and Andy run to Evan's locker. When they open it, a giant wave of Monster Blood shoots out! Evan grabs a bit of Monster Blood and swallows it.

As he begins to increase in size, Evan enters the classroom to face Cuddles, who is about the same size as Evan. Unfortunately, Evan stops growing suddenly, and as they are both the same size, he and Cuddles get into a wrestling match. Evan is unable to subdue Cuddles, who is still heavier due to being much fatter than Evan. Just as Cuddles overpowers Evan, they both shrink down to their original sizes. Andy picks up the Monster Blood can and notices it has an expiration date; the Monster Blood was set to expire that very day. Evan is congratulated by Mr. Murphy. As a reward, Mr. Murphy decides to give Cuddles to Evan as a gift.

That night, Andy visits Evan with a surprise: her parents brought her a can of Monster Blood from Germany. Andy says that she has already opened the can, but she promises not to use it. The two kids leave the room and eat dinner. When they return, Evan sees Cuddles and asks what he is eating. 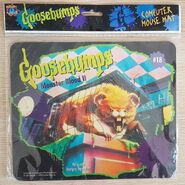 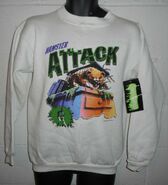 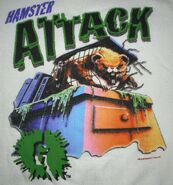 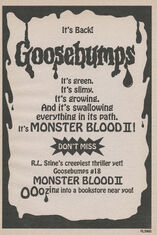 Book advertisement from Why I'm Afraid of Bees. 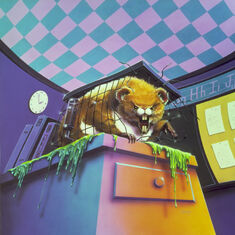 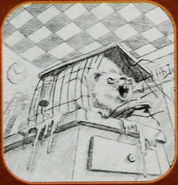