"Monster Blood" is the fifteenth episode of season two of the Goosebumps TV series, and the thirty-fourth episode overall. It premiered on Fox during the Fox Kids block on November 16, 1996.

During a stay at his weird Aunt Kathryn's, Evan is forbidden to enter one of her upstairs rooms. He just has to find out what's behind that door! But when he decides to take a peek, Evan finds more than he bargained for: an old, dusty can of "Monster Blood" that's green and slimy and starting to grow! 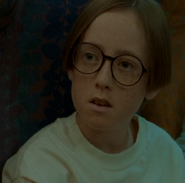 Julia
Add a photo to this gallery

Trigger attacking Sarabeth.
Add a photo to this gallery

Retrieved from "https://goosebumps.fandom.com/wiki/Monster_Blood_(book)/TV_episode?oldid=136757"
Community content is available under CC-BY-SA unless otherwise noted.