Goosebumps Wiki
Register
Don't have an account?
Sign In
Advertisement
in: Monsters, Villains in Goosebumps HorrorLand (series), Villains,
and 15 more

Initially, Monster Blood resembles a typical novelty "slime" toy, such as Mars Mud or Silly Putty, and comes in a small metal can. It can glow in the dark and will bounce like a ball when thrown. However, it is also alive, able to move on its own and consume anything it can envelop, including people and animals, to add to its mass. In addition, any living thing that consumes Monster Blood will grow several times their original size.

Monster Blood makes its debut in the third Goosebumps book. It is found in an old toy store contained in a dusty metal can opened by Evan Ross and Andy. It's innocuous at first, cool to the touch, glowing, stretchy, and bouncy. It evolves and becomes warm, sticky, and bubbling. Soon after Evan and Andy open the Monster Blood, Evan's dog Trigger eats some and grows very large. The Monster Blood itself grows larger and larger as the story progresses, eating several objects and even a couple people. It's later revealed that the Monster Blood's abilities were caused by a spell cast by a witch named Sarabeth. She meets her demise when Trigger knocks her into the huge mass of Monster Blood, which causes it to shrink to a puddle. Later when Evan and Andy go to collect it, they find that it mysteriously vanished.

The Monster Blood saga continues in the twenty-ninth Goosebumps book. Evan and Andy come up with a plan to get back at Evan's cousin Kermit with Monster Blood for getting on their nerves. Their plan goes wrong and Evan accidentally swallows some and grows at least two stories high. He then sticks the bully Conan up a tree and plays a game of softball, though this doesn't last long, as he is a highly visible and an unusual sight at his new height, attracting public attention. The police and fire department soon come, thinking he is an alien threat. Eventually, Kermit makes a formula at home which causes shrinking, allowing Evan to drink it. Evan wakes up the next day and is the size of a mouse.

The regular green Monster Blood does not appear in the sixty-fourth and last original series Goosebumps book. Instead, a new type of Monster Blood appears that is an aquatic military super weapon that multiplies when it is exposed to water. It more resembles slugs or snails than slime, and has eye stalks and mouths with razor sharp teeth. Similar to the original Monster Blood, it causes changes to the body when consumed, such as becoming mean, the constant desire for drinking water, and the ability multiply.

After an eleven-year hiatus, the Monster Blood saga continues in the third Goosebumps HorrorLand book. This time, Monster Blood is a "12 Hour Trial Strength" version that comes in a plastic egg like Silly Putty and is sold on a shady website that can damage the computer of whoever orders it. Evan and friends don't appear, as a new character by the name Matt Daniels is the one who deals with it this time around. After he consumes the blood grows about nine feet tall. Monster Blood then follows him to HorrorLand where it sucks up Sheena Deep and a Horror named Byron who saved Matt and Sheena's brother, Billy.

Monster Blood Is Back

After another decade of no new Monster Blood installments, Monster Blood returns once again in the fourteenth Goosebumps SlappyWorld book. Two girls called Sascha Nelson and Nicole Hillard use a can of "Monster Blood is Back" to help them win the Kids Big Chef Food Fight competition. However, the ooze begins to grow and cause mayhem once again. In this book, one way to defeat the green slime is to stomp on it repeatedly.

In the television adaptation of the first book, Monster Blood serves the same role it does in the book, but with some differences. Monster's Blood origins are slightly altered, being substance created by Sarabeth rather than being a normal toy that had a spell put on it. It also appears more bouncy and sensitive to the touch, and it will only stop growing when it is put back in its jar. In the follow-up titled "More Monster Blood", Monster Blood wreaks havoc on plane, but is defeated with airline food, which causes it to shrink.

Outside of the Monster Blood saga and TV series, Monster Blood has made several cameos and minor appearances throughout the Goosebumps franchise, such as in the Give Yourself Goosebumps series. It briefly appears in Escape from the Carnival of Horrors, Beware of the Purple Peanut Butter, and is mentioned as a puzzle in One Night in Payne House, where the reader needs to know the color of Monster Blood in order to solve something.

Monster Blood appears alongside Slappy the Dummy for the first time in the 1998 stage play Goosebumps Live on Stage: Screams in the Night, where Slappy uses the blood to grow into a giant. The same year in the Goosebumps Series 2000 series, Evan Ross appears on a television in Return to HorrorLand talking about his encounters with Monster Blood.

Monster Blood makes a light cameo in the 2008 video game Goosebumps HorrorLand as one of the Monster Cards that can be collected throughout the game. Monster Blood makes its first physical game appearance in Goosebumps: The Game, where the player encounters it in the tunnels beneath Dead House, then a second time at the entrance to the attic. In the mobile game Goosebumps HorrorTown, the original and 12 hour versions appear as items during the "Monster Blood" event released in 2019. In Goosebumps Dead of Night, Monster Blood is seen on locked doors in Stine's house. It was stolen by Slappy the Dummy and used as a weapon as you chase him through the basement.

In the 2017 Goosebumps comic arc Monsters at Midnight, Monster Blood appears in the first issue at a food stand, with Slappy offering it to the kids. At the end of the second issue, Irk drinks some in order to become giant. In the third issue, Ginny convinces her to calm down, causing her to shrink back to normal.

Monster Blood is a slimy green substance that is usually either cold or hot. Brandon Dorman's interpretation of Monster Blood gives it a sentient form and face.

Monster Blood has a very enormous appetite and would always swallow anyone or anything that gets in its way. However, the Monster Blood can never last forever as its magic would always wear out on an expiration date and if someone thought of a cure for its effects. But every time one opens the Monster Blood, they are doomed and are in even more trouble if they swallow it.

Asides from the ordinary green variant, there actually are also other variations of slime that are used in a similar fashion: 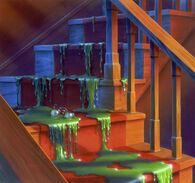 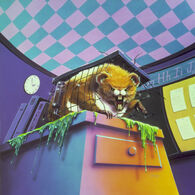 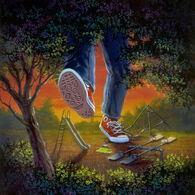 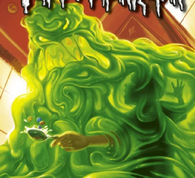 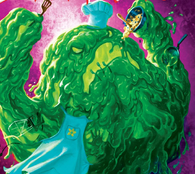 Monster Blood in a dark room in Goosebumps: The Game.

Monster Blood splashed on the screen, attacking the player in Goosebumps: The Game.

Monster Blood splashed on the screen in Goosebumps Dead of Night.

Monster Blood splashed on a door in Goosebumps Dead of Night.

A container of Monster Blood as seen in the moving van, from Goosebumps: The Game. 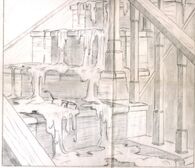 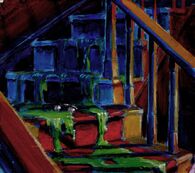 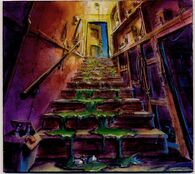