Michael Webster is the protagonist in the twenty-eighth Goosebumps book, The Cuckoo Clock of Doom, as well as its television adaptation. He is the older brother of Tara Webster.

Michael wanted to get revenge on his little sister Tara for all of the horrible things she done to him, so when Michael's father caught and got upset at Tara for messing with his cuckoo clock, Michael thought it would a good idea to finally get revenge on his sister. So he went to the cuckoo clock and twisted the cuckoo bird's head. This causes him to get caught in a time warp. He went back in time to his 12th birthday, and then to his 6th birthday and finally where he was a baby. As a baby, he successfully turned the head of the cuckoo forward and was twelve again. However, he accidentally knocked the 1988 dial off the clock, causing Tara to be erased from history. He noticed this, and thought that he should go back and get her. However, it's likely he will not.

Michael is twelve-years-old, Caucasian, short for his age, but not skinny. He has short and thick brown hair. Everyone says that he and Tara look alike, which Michael hates.

In the television series, his hair is blond and comes down to his neck.

Michael is best known for his hatred of his younger sister Tara. He hated it when she got him in trouble and he hated it when his parents blamed him for something that was her fault. And this unfortunately gave him a complicated relationship with his mother, as she was so unfair to him by saying that he is always making things up, telling fibs and impossible stories and that his father was encouraging his "imagination" too much, even though Michael doesn't have an imagination. He is also sick of the no-meat, low-fat meals that she constantly makes for dinner.

Michael is also close to his friends and has a crush on Mona as there is something sort of cool about her that he really liked. He began to have second thoughts about her during going in time at nursery school when he saw what she used to be like. But after Cecilia told him that Mona had a crush on him, he began to reconsider his crush. Michael also likes to have some privacy and really works out in sports. 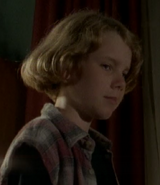 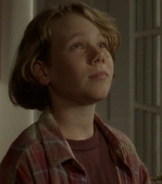 Michael as depicted on the Dutch cover of The Cuckoo Clock of Doom.