Jonathan Schwartz
Max Thompson is the protagonist of the sixth Goosebumps book, Let's Get Invisible!, as well as its television adaptation.

Max Thompson hosts his birthday party at his home. Whitey, Max's dog, runs to the attic. While the guests look for him, they find a large, old mirror. Max pulls the chain of an overhead light. As soon as he does this, he disappears.

Max wants to avoid using the mirror, but his brother, Noah "Lefty" Thompson, wants to test the mirror's limits. Lefty eventually begins sneaking off on his own to become invisible and pull pranks on Max. Max's friends all begin competing to see who can stay invisible the longest, but Max tries to put a stop to this.

As Max eventually learns, if someone is invisible for too long a period of time, they risk being sucked into the mirror and forced to trade places with their reflection.

Lefty invites Max's friends — Zack, Erin, and April — over for an invisibility contest. Once Zack and Erin's clones are released, they force Max to go invisible. Before Max's reflection can swap places with him, the duplicates of Erin and Zack make Max visible again, assuming that the change has already been completed. Suddenly, Max's reflection appears in the mirror. He tells them that the real Max escaped. The duplicates of Erin and Zack try to make Max invisible again.

Unexpectedly, Lefty enters the attic and breaks the mirror using a softball. The evil reflections are sucked into the mirror's pieces, and the real Erin and Zack are brought back into the real world.

Finally, Max and his brother decide to play catch. To his horror, Max notices that Lefty is throwing with his right hand — despite originally being left handed, meaning Lefty was trapped in the mirror.

Max is twelve-years-old, Caucasian, and handsome with blue eyes and blond hair which he combs all the time.

In the original cover, he is wearing an orange long-sleeve T-shirt and blue jeans. In the Classic Goosebumps cover, he wears a baby-blue T-shirt with the image of a green cartoonish skateboarder and blue basketball shorts. He also wears a white and green baseball hat and a watch.

Max as depicted on the UK cover of Let's Get Invisible!.

Max's reflection as it appeared in the TV adaptation.

Max and his reflection as depicted on a Topps trading card. 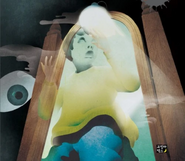 Max as depicted on the Korean cover of Let's Get Invisible!.