The Masked Mutant is a supervillain and the main antagonist in the twenty-fifth Goosebumps book, Attack of the Mutant.

This section is too long, and it needs to be rewritten to be more concise.
Skipper Matthews loves comic books. His favorite series is The Masked Mutant, a comic series about a shapeshifting villain named the Masked Mutant.

One day, Skipper has to go to the orthodontist. While riding the bus there, he meets a girl who introduces herself as Libby Zacks. After talking for a while, Skipper realizes that he doesn't know where the bus is. Skipper gets off the bus and sees a tall, pink building. The structure looks exactly like the Masked Mutant's headquarters. Skipper, not wanting to be late for his appointment, doesn't have time to investigate.

Skipper doesn't get a chance to go back to the building until a week later. He rides the bus to the same spot as last time, but he discovers that the building has seemingly vanished, leaving only an empty lot. Skipper eventually goes home, and he's been delivered another entry of The Masked Mutant. In the story, the Masked Mutant disguises his headquarters with an invisibility curtain. Skipper deduces that the building from early must have been disguised in a similar way.

Skipper eventually gets back on the bus. He meets Libby and tries to explain his theory. Libby is skeptical, but she agrees to investigate the seemingly empty lot with Skipper. As the kids walk farther into the lot, the building appears before them. Skipper sneaks inside the building, and Libby reluctantly follows. A yellow light shoots out of a wall and onto Skipper, but he can't discern what it was supposed to do. The two kids enter an elevator. The elevator unexpectedly takes the kids down. When the doors open, the kids are greeted with what appears to be a basement. None of the elevator's buttons seem to do anything, so they are forced to get out. As Skipper is walking, he notices that he's become separated from Libby. Skipper finds a room filled with drawings for The Masked Mutant, and he begins to suspect that he's in the production headquarters for the series. However, Skipper's excitement is cut short when he finds sketches of himself. Libby finds Skipper, and she convinces him to leave.

The duo finds the the Masked Mutant, and the Galloping Gazelle runs around him, attempting to use his super-speed to cause a whirlwind. The Masked Mutant easily trips the hero. The Mutant turns into a leopard, and the Galloping Gazelle runs away, leaving Skipper on his own with the villain. The Masked Mutant wants to know what Skipper's superpowers are, but Skipper insists that he doesn't have any. The villain lifts Skipper into the air, but Libby enters the room. The Masked Mutant tells Libby that she isn't allowed to leave. Libby pulls out a toy gun and aims it at the villain. She insists that — if they're in a comic — they can do anything that they want. She pulls the trigger, and the gun shoots out a beam, dissolving the evil-doer. Skipper is initially happy, but he watches Libby transform into the Masked Mutant. The Masked Mutant reveals that the villain who was disintegrated was the Magnificent Molecule Man, who was filling in for the Mutant. As Skipper slowly learns that Libby was never real. The Mutant explains that he wants new foes, and — because Skipper is knowledgeable about the series — he would make a great character. The light that had shone on Skipper when he first entered the headquarters turned him into a comic book character.

Skipper gets an idea. He declares that he is actually the Colossal Elastic Boy, and he can only be defeated by sulphuric acid. The Mutant turns himself into a wave of acid, which Skipper dodges. Skipper knows that he has defeated the villain because the Mutant can only turn into solids; if he turns into a liquid, he's trapped in that form.

Gleefully, Skipper goes home, and he decides to cut himself a piece of cake. While doing this, Skipper accidentally nicks his hand with a knife, but blood does not come out of the cut. Skipper bleeds ink, revealing that his career in comics isn't over.

The Masked Mutant is bent on transforming the real world into a comic book. He has constructed a "Green Beam" machine that can convert people and buildings into comic book drawings. When the villainous Mutant encounters the player during the final confrontation, the player destroys a tank of "Slima-Bean Juice" behind him. He is drenched in the green ooze and starts sobbing, as he shrinks away into nothing. Everything affected by the Green Beam reverts back to normal afterwards.

The Masked Mutant was a tall and powerful-looking man. He wears a dark blue and orange costume, cape and mask. In the video game, his suit is dark purple and yellow, and he has yellow lenses over the eye holes of his cowl.

When disguised as Libby Zacks, The Mutant appeared as a young girl with carrot-colored hair tied back into a single braid. Libby also had green eyes and light freckles on her nose.

The Masked Mutant acted in just the way the classic supervillain would act. He was deceitful and sadistic and he was really bent on world domination and he was the most fearsome supervillain ever created. He was very sneaky, considering that he was able to hide from The League of Good Guys with his power to transform into anything solid and he was always determined to annihilate his arch-enemies and he hated it when any of them interfered with his plans. And he was very capable of lying and he bragged that it was one of his better qualities. The Masked Mutant was always determined to find new faces, good characters for his stories, to find good foes for his stories (it could be an indication that he was bored with fighting the same arch-enemies over again). But he would always be sure that it would be over for his new foes as well. The Masked Mutant may have been evil, but he had a tendency to underestimate his enemies, which did lead to his downfall.

The Masked Mutant was a comic book villain with the power to alter his molecular form to transform into any solid. There was a set-back, though. Once he transformed into any kind of liquid, he could not ever change back to his normal self. However it's revealed in Goosebumps HorrorTown that he managed fix this weakness not too long ago. 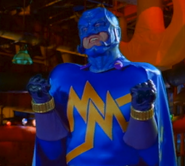 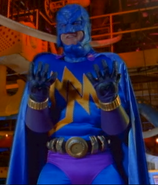 The Masked Mutant is on the far right.

Add a photo to this gallery
Retrieved from "https://goosebumps.fandom.com/wiki/Masked_Mutant?oldid=114428"
Community content is available under CC-BY-SA unless otherwise noted.