Julissa Aguirre
Mary-Ellen is a living doll and a tritagonist who appeared in the second Goosebumps Series 2000 book, Bride of the Living Dummy, and its television adaptation.

Mary-Ellen was brought to the protagonist's house by her father, who gave her as a gift for Katie and Amanda. Mary-Ellen revealed to be alive and began to treat the two twin girls as her slaves, threatening to hurt them if they dare disobey her orders and tell anyone about her secret. Although Mary-Ellen acts like an awakened dummy (enslaving the person who read the magic spell that brings puppets to life), it is unknown how Mary-Ellen came to be before being brought to Jillian's house.

As Mary-Ellen enslaved Katie and Amanda, she made them appear like two spoiled brats fixated to a toy from Jillian's perspective, who grew a genuine hatred for the doll, unknowingly getting loathed back by the evil sentient Mary-Ellen.

When Jillian, Katie, Amanda, and Jillian's best friend Harrison go to see the amazing Jimmy 'O James, Mary-Ellen falls in love with the young ventriloquist's dummy Slappy. When Katie, Amanda, and Mary-Ellen are asked up on stage, Slappy insults the twins and the doll. The Zinman twins go backstage to make Jimmy apologize for what he supposedly made Slappy say. Later, a broken Slappy is discovered in a trash can and left at the Zinman home as the girls' father is a hobbyist carpenter and can fix his jaw.

Mary-Ellen spends most of the book tormenting Jillian with Slappy, secretly sabotages her clown tricks (ruining Jillian's performance at a birthday party) and trashes the dining room making it appear as if Slappy did it to scare and confuse Jillian, as the doll plans to read the magic spell and bring Slappy to life so that they can live happily together and make Jillian's life miserable as their slave, along with the two twins.

When Mary-Ellen brings Slappy to life, however, the dummy is disgusted by the doll and tosses her aside as he reveals to be in love with Jillian. At that point Mary-Ellen reveals to be alive and pushes Slappy around for refusing her despite everything she did for him. Even after explaining her evil plan of enslaving Jillian, Katie and Amanda, Slappy still rejects the doll as his bride and a violent fight ensues between the living dummy and doll. In the end Slappy turns on the buzz saw of Jillian's father and tosses Mary-Ellen into it, but before dying she grabs him by the legs and causes him to get cut into pieces as well. While Slappy's spirit possesses Jillian, Mary-Ellen appears to be permanently dead.

Slappy is brought to life by Jimmy 'O James, instead of Mary-Ellen. He offered Jimmy an "offer he couldn't refuse." That offer was to be Slappy's slave and also having Jimmy act as if he were a ventriloquist in a show starring Slappy. He was already alive when Harrison, Jillian, and Katie went there to see the show. Instead of Mary-Ellen staring at Slappy, Slappy was staring at her (actually, he was staring at Katy).

Mary-Ellen thought that he was staring at her and had fallen in love with him. After the show, Katie loses Mary-Ellen and Jillian goes back-stage to look for her. She stumbles upon Jimmy seemingly arguing with Slappy (later found out that Slappy was talking Jimmy into giving him to the family of his 'bride') Much later, Jillian and Katie are running away from Slappy, when Mary-Ellen reveals herself to be alive after Jillian calls her a "dumb doll." Mary-Ellen replied, "Who are you calling dumb, ugly!", causing Jillian to drop her. Slappy comes in through the basement window. Now, they are both trapped by both Mary-Ellen AND Slappy.

Slappy tells them he stole their mother's ring for the special occasion, making Mary-Ellen reply, "Oh Slappy! You say the nicest things! Now I will be your bride!" Slappy then replies, "What? I don't want you cheap piece of plastic!" slapping Mary-Ellen across the face, then completing his sentence saying, "I want her!" pointing at Katy.  Mary-Ellen becomes enraged at Slappy's betrayal of her and starts attacking him. They fight on the basement stairs. Jillian notices him near the saw switch and turns on the light. But Slappy's head (which was shoved down by Mary Ellen) rises and clicks on the saw. The two are pulled into the saw blades and are killed. We then see Slappy and Mary-Ellen's ghosts float out of their ruined bodies and disappear. Their parents then come home and the two children tell them that Harrison was locked in the bathroom. They unlock it with a spare key, but Slappy has possessed Harrison.  Mary Ellen has safely escaped.

Mary-Ellen is short, with rosy cheeks and a malicious smile. She has purple eyes and black hair with white streaks dyed in it, usually tied in a bun, similar to the Bride of Frankenstein. She has quite a ruddy complexion and a Shirley Temple nose. She also wears a white dress with a pink sash tied around her waist. In the episode, she is blonde with blue eyes and wears a white dress. 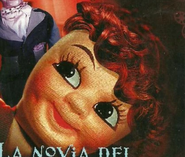 Mary-Ellen as depicted on the Spanish cover of Bride of the Living Dummy.

Mary-Ellen as depicted on the Korean cover of Bride of the Living Dummy.
Add a photo to this gallery

Add a photo to this gallery
Retrieved from "https://goosebumps.fandom.com/wiki/Mary-Ellen?oldid=151251"
Community content is available under CC-BY-SA unless otherwise noted.