Daniel Clark
Mark Rowe is the protagonist in the thirty-ninth book in the original Goosebumps series, How I Got My Shrunken Head, as well as its television adaptation.

Mark receives a visit and gift from Carolyn, a coworker of his Aunt Benna, who is conducting research on a jungle island called Baladora. Carolyn has brought him a shrunken head, much like the shrunken heads he collects in his video game, Jungle King.

Mark accompanies Carolyn to Baladora under false pretenses, and learns that his Aunt Benna is missing. He learns he has powers called Jungle Magic, and must use them to find and save his aunt. Benna gave Mark Jungle Magic when he was just four-years-old to keep the power safe and away from her coworkers.

Mark runs away and uses his Jungle Magic to not only locate his aunt, but to get out of sticky situations in the jungle.

After Mark locates Benna, Mark and Benna are captured and held prisoner by Dr. Hawlings, another one of Benna's coworkers, and Carolyn, who want the Jungle Magic for themselves.

Mark uses Jungle Magic once more to save his aunt and himself, which shrinks Dr. Hawling, his daughter Kareen, and Carolyn down to the size of mice.

Benna escorts Mark home, and once he is safe, she takes back the Jungle Magic.

Mark describes himself as short and chubby.

Mark has a power called Jungle Magic. If he is holding his shrunken head, he can use Jungle Magic to make the jungle do his bidding. He uses Jungle Magic to thwart off red ants and a tiger, to call vines to pull him out of quicksand, and to shrink people who are trying to hurt him. 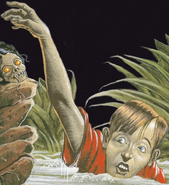 Mark as depicted on the French cover of How I Got My Shrunken Head.

Mark as depicted on the Dutch cover of How I Got My Shrunken Head.
Community content is available under CC-BY-SA unless otherwise noted.
Advertisement