Deborah Scorsone
Lucille "Lucy" Dark is the protagonist in the eighth Goosebumps book, The Girl Who Cried Monster, as well as its television adaptation.

Timberland Falls resident Lucy Dark is known to be a bit of a liar. She's accumulated a reputation for telling fake scary stories. She tortures her brother, Randy, by convincing him that there are monsters all around.

Lucy is a member of the "Reading Rangers" at her library, a summer reading program for kids. One day, she stayed a little too late at the library and accidentally discovered that Mr. Mortman, the librarian, is actually a monster. She watched him transform and eat bugs.

Sadly, when Lucy tried to warn her family and friends, nobody believed her. However, when her parents discover she is telling the truth, they decided to invite Mortman over for dinner. At dinner, they transformed into monsters and ate him. They explained to Lucy that they didn't believe her because no monsters have been seen in many years.

Lucy is known for being obsessed with monsters. She likes to make up her own stories about them and scare people with them. Her favorite victim is her younger brother Randy, as he is always too easy to scare. Lucy loves to scare her little brother, always bullying, teasing, and harassing him by pretending to see monsters everywhere and telling him scary stories until he begs her to stop. Of course, this gets Lucy in trouble with her parents, as her stories are doing permanent harm to Randy, and that she should be encouraging him to be brave instead of making him terrified.

She can get pretty annoyed with some things at times — such as when no one was taking her seriously about Mr. Mortman and how her friend, Aaron, let her down when he was meant to spy on the monster with her — but she is very close to them anyway.

Lucy has a really good imagination and her mother says maybe she can be a writer when she grows up, which Lucy is not sure about. She knows that it doesn’t take a whole lot of imagination to scare Randy. She also finds it thrilling to spy on people, even if they aren’t doing anything interesting.

Lucy is short and a little bit chubby with long, straight black hair, a round face, really fair skin and big black eyes. Her eyelashes are shorter than her younger brother's, which makes her kind of jealous, but her nose is straighter and her teeth don't stick out when she smiles.

Lucy as depicted on the UK cover of The Girl Who Cried Monster.

Lucy as depicted on the Dutch cover of The Girl Who Cried Monster. 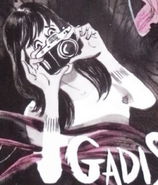 Lucy as depicted on the Indonesian cover of The Girl Who Cried Monster.