Lost in Stinkeye Swamp is the twenty-fourth book in the Give Yourself Goosebumps gamebook series. It was published in 1997, and is the last cover to be illustrated by Mark Nagata.

The cover artwork features a giant Venus Fly-trap standing in a swampland. Two alligators are seen swimming in the background.

Welcome to Swamp House—your new home. It's ugly, run-down, and haunted by a ghost named Annabelle. That's bad. But there's treasure hidden on the grounds. That’s good—if you can survive long enough to find it.

In the basement you'll find a magic telescope and Annabelle’s two-hundred-year-old diary. Can a telescope help you strike it rich? Only if you make it through a swamp full of deadly gators and giant meat-eating pod plants. What? You're dying to read Annabelle’s diary? Well, let's hope Annabelle doesn’t mind. Because she’s watching you...

Book advertisement from I Live in Your Basement!.
Add a photo to this gallery 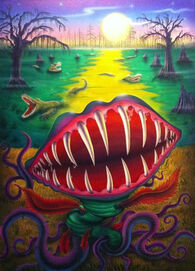 Retrieved from "https://goosebumps.fandom.com/wiki/Lost_in_Stinkeye_Swamp?oldid=125924"
Community content is available under CC-BY-SA unless otherwise noted.